Clarksville, TN – Austin Peay State University Men’s Basketball will head to Vanderbilt to play the Commodores for the first time since the 2007-08 season opener, an 81-67 Governors defeat, November 10th, 2007. 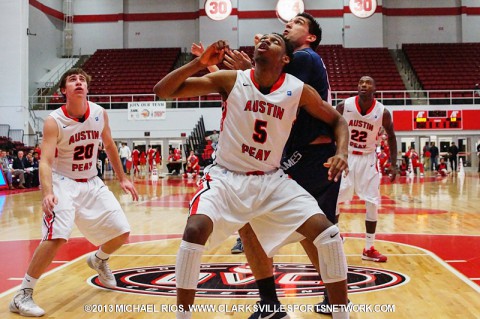 The Governors will be seeking their second road win this season. APSU won at Youngstown State. 88-86, November 30th.

This is Vanderbilt’s first game since December 5th, when the Commodores defeated Marshall, 69-67, in Memorial Gymnasium. After the 12-day layoff, this is the second of a five-game homestand for Vandy.

When point guard Damarius Smith dished out 12 assists against Liberty it was the second time he had recorded double-digit assists this season. He is the first Gov to record multiple single-season double-digit assist games since Derek Wright tallied three in the 2007-08 season.

Austin Peay sophomore center Chris Horton was named OVC Player of the Week after tallying 21 points, 11 rebounds and four blocks against Liberty. It was Horton’s fifth double-double this season and the 21 points represented his season’s second 20-point outing.

This is Austin Peay’s first game against a Southeastern Conference foe since downing Tennessee, 74-70, December 10th, 2011.

What A Loss Would Mean
The Govs would drop to one game below the .500 mark at 5-6. It would be APSU’s second straight road defeat. APSU would drop to 1-3 in December. It would drop Dave Loos to 0-8 all-time against Vanderbilt. Loos would drop to 458-392 overall and 376-339 as the Governors head coach.

It was good enough to help the 6-8, 205-pound Decatur, GA, his first Ohio Valley Conference Player of the Week Honor. Horton was OVC Freshman of the Year a year ago in blocking 100 shots.

With his 11 rebounds against Liberty, Chris Horton has led or been the Govs’ co-leader in rebounds in all 10 games this season. He is averaging 10.1 rpg for the season.

For the second time this season, junior guard Damarius Smith posted a double digit assist total, with a career-high 12 against Liberty.

It was the highest total posted by a Gov since Derek Wright had 12 assists at UT Martin, January 3rd, 2008.

Travis Betran’s 23 points and Chris Horton’s 21 against Liberty marked the first time two Govs scored 20 since Will Triggs and Travis Betran had 20 each against Morehead State, January 9th, 2013.

When Travis Betran had 23 points, Chris Horton 21, Will Triggs 12 and Ed Dyson 10, it was the second time this season the Govs placed four players in double figures–the first time coming at Central Michigan.

Austin Peay and Chris Horton has won the tip 10 out of 11 times this season, including overtimes, this season. The only tip he lost was the opening one against Memphis.

When senior guard Travis Betran scored 23 points against Liberty it was the 14th time—three times this season—in 41 career games the Harlem, NY native has scored 20 or more points.