Clarksville, TN – What does a son say to his mother as he watches her dying for the third time?

Well, maybe technically the second time. The third time was an extension of the second, that second being when her soul left her. He was down the hospital hall then, minutes away. His dad told him about it, and a nurse backed up the story of the bright, white sunrise filling the hospital room, encircling her face, providing a halo. “It was her soul leaving her,” his dad told him as they looked at his mother, barely clinging to life. “I saw the light,” his dad said.

His mother had seen the light, too, a few months earlier, the first time she died. She told him about it.

His dad had phoned him at work to say that she had gone. By the time he arrived at her hospital bedside, she had rallied slightly. A day later she told him, “I was dead. I saw the light. And, then I was back. I died and it wasn’t so bad.”

This time was different, though, and author Tim Ghianni knew it. It was time for him to talk with her as he never had, to at last tell her what he’d not had the courage to before, that it was OK for her to let go.

Ghianni, longtime columnist and managing editor at The Leaf-Chronicle, later an editor at the Nashville Banner and Tennessean, picks up his pen to tell us about what is a love letter to his dying mother, words first spoken to her in her final hours, and now put on paper for us to share. And, to learn from those words. 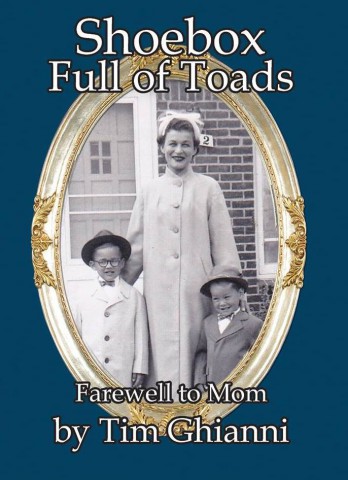 In his just published slim volume, “Shoebox Full of Toads: Farewell to Mom,” he gives us Ghianni family stories and memories, just as he used to give us the stories of Clarksvillians of all strata of life. But these stories, as he talks with his mother, also provide a gentle and sometimes funny lesson for all of us in how to say goodbye to our own loved ones. Or, nudges us to not wait until time for goodbyes. To share now.

In those last few hours, Ghianni struggled with what to say to the dying woman on the hospital bed who had given him life. He knew he didn’t have much time, but he wanted to tell her how her own life had helped shape his. So, he began talking, not knowing what was going to come out, reeling off memories from his childhood, from his youth and his adulthood, all stages where she provided constancy. Each memory spurred another: of his incarceration, at the hands of his brother, in David Crockett’s cabin, and the time she caught him and a toddler pal doing Evel Knievel tricks near a deep canal.

As the bedside monologue continued, for the hours his mom was still with him, he spun the tale of his own life, a Baby Boomer’s existence, and he described how she influenced it. There are the Beatles, George Bailey and Elvis, the Rolling Stones, of going where the buffalo roam. And, there is a roll-call of pets, from those in his parents home to those he and his wife Susanne, also a former Leaf-Chronicle alumnus, have taken in.

About Shoebox Full of Toads

Tim Ghianni’s “Shoebox Full of Toads,” published by Westview, Inc., Kingston Springs, TN, can be ordered for $25.00, including postage, from the author at 471 Rochelle Drive, Nashville, TN 37220, or from Amazon.com.

Dee Boaz
Dee Boaz retired in 1994 as editor of The Leaf-Chronicle newspaper in Clarksville, after leading the news organization to 135 state and national press awards. She also was the first female chair of Mid-American Press Institute, an organization representing daily newspapers of all sizes in 20 states from the Canadian border to the Gulf Coast. Boaz is known for more than her professional success in journalism. She also has been a trailblazer in the community, having served on many boards and in several civic organizations. Most notably, she was a co-founder and graduate of Leadership Clarksville and a co-founder of the Museum Guild. She was a charter member of the Junior Auxiliary of Clarksville and served on an advisory committee that established the Robert Penn Warren Center in Clarksville, which preserves and promotes literature by significant local authors. She is active with Austin Peay State University serving on the APSU Acuff Circle of Excellence Community Advisory Board, the APSU Foundation and the APSU Woodward Library Society
RELATED ARTICLES
Arts/Leisure