Fort Campbell, KY – Two lines of cars trying to enter Fort Campbell through Gate 4, one of the busiest of the installation’s 10 access control points, stretch nearly back to Fort Campbell Boulevard.

Three soldiers stop cars at the gate. Judging by outward appearances, including the fluorescent yellow vest, large black belts and pistols, the only thing different about these soldiers from the military police soldiers who normally staff the ACP is their patch. They all wear the 101st Airborne Division (Air Assault) eagle patch on their left shoulder.

The vehicles are a constant stream and the soldiers briefly stop each vehicle. The first thing the soldiers do is give them a respectful greeting, usually accompanied by a smile. They take the drivers’ identification, inspect it and send the vehicles on their way with some kind words, like “have a great day.”

Usually the vehicles only stop for a handful of seconds. Sometimes when the soldiers have the drivers open their trunks, it takes a couple of minutes. Occasionally, the soldiers turn a vehicle away for lack of identification. Everything happens quite efficiently, and traffic flows through the gate without any unnecessary delay.

Spc. Bryan Clark, an infantryman from 1st Battalion, 187th Infantry Regiment, 3rd Brigade Combat Team, 101st Airborne Division, and one of the gate guards, says his job on the gate is “keeping the bad guys out” and protecting the installation. When his unit asked for soldiers for the mission, he volunteered. 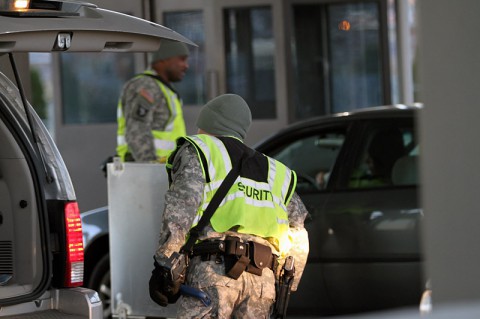 With an average of nearly 40,000 vehicles entering the post each day, the soldiers on the gates face an almost endless flow of traffic to check. Also, the gates are open every day, with three gates being open 24 hours a day, every day of the year, including holidays. Soldiers on the gates must stop every vehicle and check every ID to help keep Fort Campbell safe.

Capt. Jon. S. Donaldson, the commander of the 551st Military Police Company, 716th Military Police Battalion, 101st Sustainment Brigade, 101st Airborne Division, said that after two platoons from his company deployed in July and with more soldiers from the battalion preparing to deploy, the battalion identified a shortage of personnel to meet all of its missions.

Despite the deployments, the installation didn’t plan to shut down gates, so without more personnel, it would negatively impact the battalion. The unit requested help from the division to avoid that, and in late September, the division approved soldiers to assist the MPs as borrowed military manpower for six months.

“Without the help from the division soldier, without their support we would of had to cut a lot of events within our own battalion,” said Donaldson. “Like Air Assault School, NCOES (Noncommissioned Officer Education System), even leave. It would be a big boulder in our ruck sacks.”

The 551st MP Company started a two-week training program in October to teach and certify the division soldiers on skills they would need for access control operations. Donaldson said after the first two weeks of training, the soldiers received on-the-job training working beside MPs at the gates, along with advanced scenarios based training at gates 2 and 5. In November, the division soldiers took over the bulk of the ACP mission and started to excel.

“That’s what I was most impressed by was their ability to adapt, to bring disciplined initiative and apply (it) to the ACP operation, and they succeeded,” said Donaldson. “They succeeded way beyond my standards and the standards of those above me.”

Clark, a native of Fulton, IL, said the training process taught him everything he needed to perform his new duties.

Clark went on to say that he just follows the procedure he learned from training and approaches every car the same. He starts by looking at the driver. Then he looks at the car trying to see if he notices anything out of place on the car’s exterior. Then he checks to see if he can see anything in visible in the car that shouldn’t be there. 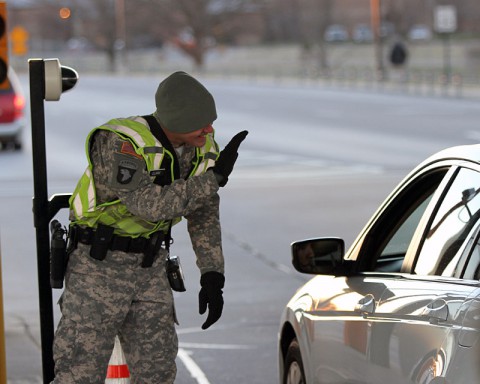 Sgt. Andre Garrett, a light wheel mechanic from Troop E, 2nd Squadron, 17th Cavalry Regiment, 101st Combat Aviation Brigade, 101st Airborne Division, and one of the gate guards said that the gate guard must show everybody respect. However, he said that staying focused is how soldiers will succeed in the mission. He said he stays focused by pushing everything else to the side except for the people coming through the gates.

“I make sure that all the people coming on post is primary,” said Garret, a native of Talladega, AL “… you just got to be focused on what you got to do and what’s your goals.”

The goal is to inspect every car the same, whether it’s the first car on their shift or the last one, and not to get distracted or complacent.

Donaldson added, “That’s how we achieve security at the perimeter of the installation; Is through those disciplined diligent checks and service that our soldiers provide.”

Garrett and Clark said they both enjoyed working at the gates.

“One thing that really makes the night for me is when I see the little kids will come up and the parents will roll down the window and the kid will like salute me or wave at me,” said Clark. “That makes my day.”

The division soldiers have not only taken over as ACP but many of the noncommissioned officers serve as sergeants of the guards and help manage these soldiers. They provide backup and oversight.

Since the division soldiers have helped the MPs, the 551st MP Company is ensuring it takes care of these soldiers.

“Going forward our future operations is we’re focusing on how do we make these soldiers better, Air Assault being one of our top goals,” said Donaldson. “We want to prepare them in their down time and then send them and give them the opportunity to earn their Air Assault wings.”

He said the company’s goal is to make sure that the 72 soldiers assigned to the 551st MP Company have the same stats for schools, awards, and other metrics as all of the other soldiers in the company. 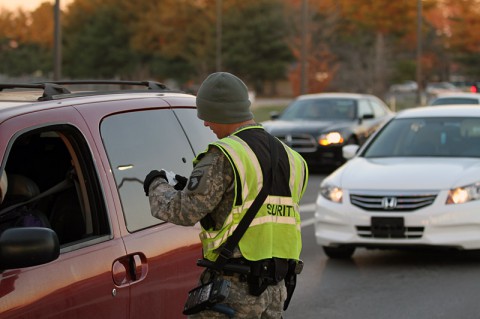 Garrett and Clark both said they felt like the all of the soldiers have bonded.

“All of the different brigades and the actual MPs, and we all work together,” said Garrett.

He said they share their experiences and always help each other out. He summed up the way the MPs have treated him since the detail began with one word – great.

The soldiers individual efforts along with the team work has allowed the mission to succeed and because of its success a different group of soldiers will join with the MPs in spring for the start of a new six month ACP mission.

“I’m actually really glad I got picked for this,” said Clark. “I would like to stay on if I could.”