Soon after landing, a small rover named Yutu (or Jade Rabbit in English) was deployed and took its first tentative drive onto the airless regolith. At the time of the landing LRO’s orbit was far from the landing site so images of the landing were not possible.

Ten days later on December 24th, LRO approached the landing site, and LROC was able to acquire a series of six LROC Narrow Angle Camera ( NAC ) image pairs during the next 36 hours (19 orbits).

The rover is only about 150 cm wide, yet it shows up in the NAC images for two reasons: the solar panels are very effective at reflecting light so the rover shows up as two bright pixels, and the Sun is setting thus the rover casts a distinct shadow (as does the lander).

Since the rover is close to the size of a pixel, how can we be sure we are seeing the rover and not a comparably sized boulder? Fortuitously, the NAC acquired a “before” image (M1127248516R) of the landing site, with nearly identical lighting, on June 30th, 2013. 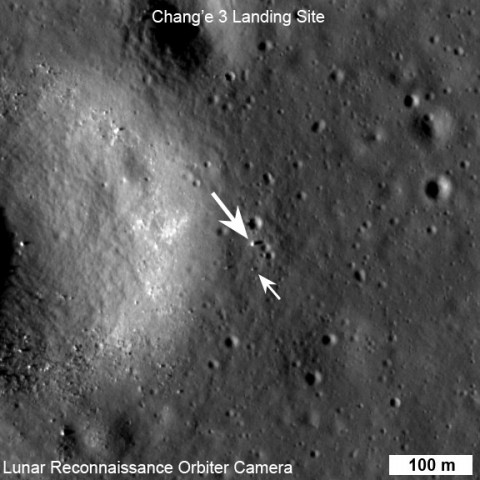 By comparing the before and after landing site images, the LROC team confirmed the position of the lander and rover, and derived accurate map coordinates for the lander (44.1214°N, 340.4884°E, 2640 meters elevation ).

The lander set down about 60 meters east of the rim of a 450 meter diameter impact crater (40 meters deep) on a thick deposit of volcanic materials. A large scale wrinkle ridge (~100 km long, 10 km wide) cuts across the area and was formed as tectonic stress caused the volcanic layers to buckle and break along faults. Wrinkle ridges are common on the Moon, Mercury and Mars.

Lunar mare basalts are divided into two main spectral (color) types: “red” and “blue” (blue is perhaps a misnomer, think “less red”). Basalts on the Moon (same on Earth) are composed mainly of two minerals, pyroxene and plagioclase, though olivine and ilmenite can sometimes occur in significant amounts.

The presence of ilmenite (FeTiO 3 ) results in lower reflectance and a “lessred” color thus the blue basalts. The landing site is on a blue mare (higher titanium) thought to be about 3.0 billion years old. The boundary (black arrows in above WAC mosaic)  with an older (3.5 billion years) red mare is only 10 km to the north.