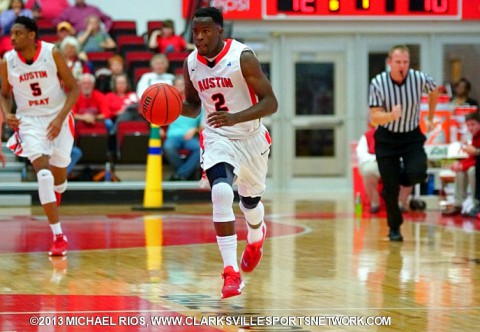 This is the fourth meeting between Austin Peay and SIU Edwardsville, with the Governors holding a 2-1 advantage. The two teams split last season’s two contests, the Cougars winning in Clarksville and the Govs returning the favor with a victory in Edwardsville.

The Governors enter the contest with an overall 8-9 record with a 2-1 mark in the OVC and sit in second place in the OVC West Division. They are coming off an 89-67 OVC lost at Murray State, Saturday. The Govs are looking for their first OVC road win against SIUE.

The contest represents a return home for APSU senior forward Will Triggs, who played his prep basketball at Edwardsville High School.

The Governors are led by senior Travis Betran and sophomore Chris Horton who each average 13.8 points a game. Edwardsville native Will Triggs is third on the team in scoring, averaging 11.6 points per game. Horton is third in the OVC in rebounding, averaging 10.0 rebounds per game.

Triggs enters the Illinois weekend—the Govs head to Eastern Illinois, Saturday—needing 27 points for 1,000 for his career. He had 17 in APSU’s loss at Murray State.

Since the Christmas break, senior guard Travis Betran has scored in double figures all four contests, finishing with 17 points against Murray State. He is 26 of 49 (53 percent) from the floor in those four games, including 16 three pointers.

Down by as many as 21 points Saturday, SIUE men’s basketball mounted a furious comeback attempt, only to come up short, falling 64-63 to Tennessee Tech at the Eblen Center.

After a layup by Donivine Stewart got the Cougars within one, 64-63, with 20 seconds left, Tennessee Tech’s Shirmane Thomas was fouled on the ensuing inbound play. Thomas missed a pair of free throws.

The second of which was rebounded by SIUE’s Maurice Wiltz. Wiltz fed the ball to Stewart who weaved through traffic to get to the basket. His finger roll missed, as did Ray Lester’s put back attempt as time expired.

SIUE comes in at 4-13 overall and 1-3 in the OVC. The Cougars are led by sophomore guard Donivine Stewart, a Bradley transfer who is averaging 11.5 ppg. The balanced Cougars have eight players averaging not only at least 6.6 ppg but more than 20 minutes played per contest.

The Cougars are coached by Lennox Forrester, who is in his seventh as coach and owns an overall 63-123 record.

The Series: This is the fourth meeting between, Austin Peay and SIU Edwardsville, the second-youngest Ohio Valley Conference member. The Governors own a 2-1 advantage, splitting last season’s two meetings. The Govs lost at home to 66-53 to the Cougars, January 17th, 2013, before they claimed a 83-71 decision in Edwardsville, February 16th.

What A Win Would Mean

What A Loss Would Mean

Despite being limited to 15 minutes because of foul trouble, Chris Horton still managed to tie Will Triggs for the rebound lead against Murray State with seven. He has led or been the rebound co-leader in all 17 games this season.

The Governors 39-38 rebound edge against Murray State was the seventh time this season the Govs won the rebound battle.

When Murray State out-shot the Govs 47.6 percent to 44.3 percent, it left the Govs 0-6 when the opponent wins the field-goal shooting battle.

The 14 free-throw attempts against Murray State were the Govs’ third fewest this season while the seven makes ranked tied for the fewest made.