Cunningham, TN – When you’re facing one of the top teams in your district you hope to have all your players healthy and ready to face the challenge.

Well, that wasn’t the case for the Montgomery Central High School girls basketball team, January 22nd at the Thomas-Young Gymnasium, as the Lady Indians were down to their third-string point guard against a defensively strong Stewart County High School squad, coming away with a 63-16 loss. 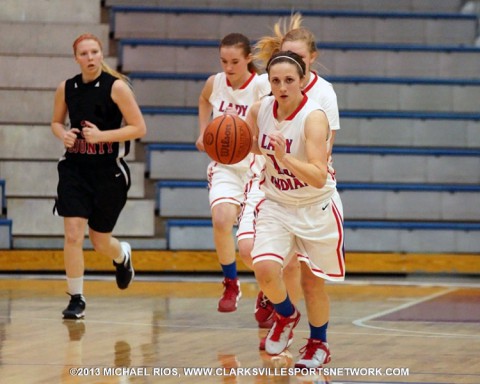 It was evident in the opening seconds that it was going to be a night to forget for the Lady Indians (5-14, 1-10 District 10-AA) with Montgomery Central going down 5-0, just 31 seconds into the game.

That early burst was the beginning of a 21-0 run by Stewart County (14-6, 8-3 District 11-AA) to open the game – including seven coming from Tennessee Martin signee Jese Vinson.

Vinson would finish with 14 points.

Montgomery Central would end the Rebelettes run with a basket from MaKayla Flake, with 2:41 left in the opening quarter.

But that would be the only points scored in the period by the Lady Indians, as Stewart County closed out the quarter the last 11 points – including six in a row by Karrah Gray – to lead 32-2 after the first eight minutes of play.

Gray finished the night with 14 points.

The second quarter would see Stewart County pull back on its pressure, but not its shooting, as the Rebelettes first three baskets of the quarter were all from behind the three-point arc.

Overall, Stewart County hit nine 3s in the game – seven coming before intermission – as they build their lead out to as many as 41 points before settling for a 40-point advantage at intermission, 46-6.

The third quarter would be the most competitive of the game, despite being played under the 35-point mercy-rule running clock, with the Lady Indians only being outscored by Stewart County 10-8, with Flake and Kristin Ford knocking down 3s for Montgomery Central.

The final quarter would be played mostly by the respective benches, with Stewart County outscoring the Lady Indians 7-2 over the final eight minutes to win by 47 points, 63-16.