Clarksville, TN – Tramon Moore scored 20 of his game-high 35 points in the second half — January 28th at the William Workman Gymnasium — to power Northwest High School, as they broke open a one-point point halftime lead into a 68-50 District 10-AAA victory over the Clarksville High School Wildcats.

Northwest (6-16, 3-8 District 10-AAA) looked like it was going to go into halftime down two points to the Wildcats, but Moore banked in a three from about 28-feet out as the buzzer sounded to give the Vikings a 27-26 lead at intermission. 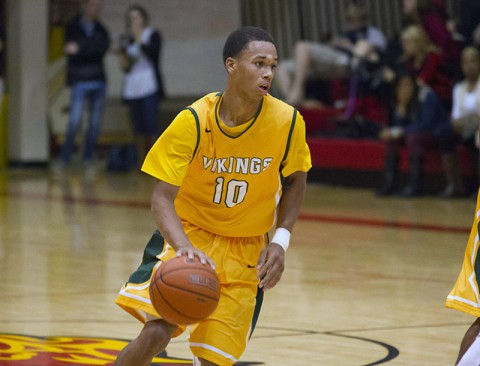 That three-point field goal would be the springboard for the Vikings in the second half, as Moore and Tyler Stafford combined to score 11 of the first 13 points put on the board by Northwest after intermission to build their lead out to 10 points, 40-30, with 2:45 left in the third quarter.

Stafford would finish with 10 points.

Clarksville High (7-15, 3-8 District 10-AAA) would try to hang around to make a late rally, as the Wildcats got to within seven points on three different occasions – the last time at 46-39 following a bucket by Brevon Johnson with 5:35 left.

The Wildcats would get no closer than 17 points the rest of the way, as Northwest ended a seven-game losing streak to Clarksville High dating back to Vikings last win over CHS on Feb. 16th, 2009.

In the first half, Clarksville High got off to a quick start by scoring the game’s first nine points, but Northwest answered back with a 12-0 run – including three straight 3s – to take the lead 12-9, before a final basket by CHS’ Avery Bates cut the Northwest lead to one point, 12-11 after the first quarter of play.

Northwest would score the first four points of the second quarter to go up five points, 16-11, before Clarksville high would put together its best scoring run of the night – 11 points – to take a 22-16 lead, with 2:45 left before halftime.

But Moore would close out the half with a flourish, nine points in the final 2:11 to lift the Vikings to the one-point advantage at intermission, 27-26.