Clarksville, TN – Austin Peay State University was held to one bucket in the final two minutes of the game as Murray State pulled away for a 96-88 decision, Friday night, in Ohio Valley Conference action in the Dunn Center.

The loss dropped Austin Peay to 9-13 overall and 3-5 in the OVC while Murray State improved to 13-8 overall and 8-1 in league play.

By then Murray State’s T.J. Sapp converted a long three pointer and Jeffrey Moss a two-point lane jumper to give the Racers a 92-86 lead before Herring’s putback.

Murray State then converted its final four free throws for the final victory margin as APSU, including Herring’s buckets, made just one of its final seven shot attempts. .

Friday’s contest was one that saw a momentum shift in each half. The Racers ran out to a 41-24 first-half lead with 4:52 left in the half only to watch the Govs slice it to eight, 45-37, at halftime as Dexter Fields scored 14 points, largely on four three pointers.

It was the Govs’ turn early in the second half. The continuously sliced at the deficit until Chris Horton’s layup with 13:20 left tied it at 58. Murray State responded with an offensive tip in by Jarvis Williams, who had seven offensive rebounds in his 14 total. But Travis Betran came right back with a three pointer with 12:38 left to give APSU its first lead, 61-60, since the score was 4-2. 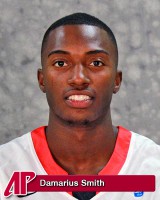 Then the contest bounced back and forth between the two teams. There would be five ties and eight lead changes in the final half. Damarius Smith appeared to give APSU a lift with a thundering dunk over Sapp and subsequent free throw to give APSU a 78-77 advantage.

Sapp immediately answered with a layup to give Murray State the lead, 78-77, with 5:24 left. Betran then nailed a three pointe to put APSU up 80-78 with 5:16 remaining. But that would be APSU’s final advantage as Sapp answered 16 seconds with a three pointer to lift Murray State to an 81-80 advantage.

Williams finished with a double-double with 28 points to go with his 14 rebounds. Fields added 17 while Sapp finished with 15, 13 in the final half. Cameron Payne added 12 points and 12 assists for the Racers, who converted on 55 percent (39 of 71) of its field goals.

The Governors were out-rebounded 45-32, allowing 17 offensive boards, while connecting on 32 of 65 (49 percent) from the floor.