Clarksville, TN – Austin Peay State University women’s tennis team will keep it in the Midstate area for a pair of weekend matches, at Middle Tennessee and back home against Southern Illinois.

The Lady Govs face the Blue Raiders 2:00pm, Friday, at Nashboro Village in Nashville before returning to the Austin Peay Tennis Center 1:00pm, Saturday, against the Salukis. 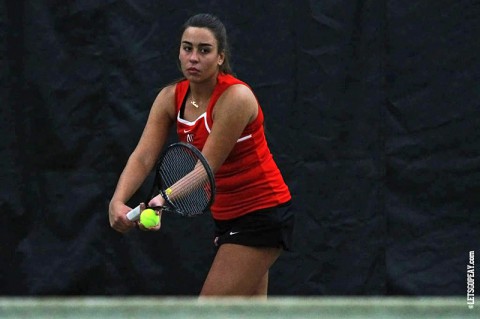 The Lady Govs are seeking their season’s first victory after an 0-2 start with losses against Chattanooga (7-0) and Northern Kentucky (4-1) on the ledger.

Senior No. 1 Andra Cornea looks to get back to her winning ways from the fall calendar. After a 6-2 mark during tournament season, she enters the weekend seeking her first dual win in 2014.

Austin Peay has dropped matches to the Salukis and the Blue Raiders in each of the last three seasons. In last year’s events, the Lady Govs took the doubles point against Middle Tennessee but lost all six singles points in a 6-1 defeat, February 20th, 2013. Two days later, the Salukis took a 7-0 decision from the Lady Govs in Carbondale, IL.

Middle Tennessee enters Friday with a 2-1 mark, with a 6-1 loss to Samford sandwiched between wins against Evansville and UAB. The Blue Raiders are first-year Conference USA members after falling to Georgia State in the Sun Belt Championship semifinals last spring.

The Salukis are 0-2 on the season after losses to 49th-ranked Arkansas (7-0) and 63rd-ranked North Texas (4-0) in Fayetteville, AR. The 2013 Missouri Valley Conference runners-up return four contributors from last year’s squad, including All-Select team member Natasha Tomishima.

The Lady Govs return to action with a 7:00pm, February 14th tilt at Lipscomb in Nashville, TN.