Nashville, TN – Austin Peay State University women’s basketball team battled back from an early deficit but could not find a game-tying basket in the final 30 seconds and fell to Belmont, 69-67, Monday night in Ohio Valley Conference action at the Curb Event Center.

Belmont responded on its next possession and regained the lead when Jordyn Luffman converted a conventional three-point play.

The Lady Govs would tie the game one more time, 65-65, when junior Kristen Stainback hit a three-pointer with 1:20 left.

The Bruins scored on their next possession and Austin Peay could not find a tying basket despite two opportunities within 5 feet. Belmont would hit a pair of free throws to extend the lead to four points and Austin Peay would not recover.

Belmont (11-14, 8-4 OVC) led the entire first half. The Bruins scored the game’s first four points and withstood a pair of Lady Govs runs that tied the game. 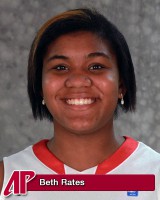 Austin Peay scored the first half’s final four points, cutting the deficit to one point, 34-33. However, a couple of close-range shots again went begging in the half’s dying moments.

The Lady Govs would grab their first lead, 38-36, on a Stainback layup at the 17:03 mark. Yet they would never lead by more than two points or for more than the ensuing Belmont possession.

Austin Peay begins a three-game homestand when it hosts SIU Edwardsville in a 5:15pm, Saturday contest at the Dunn Center.