Detective Chestnut responded to a Department of Children Services (DCS) referral in reference to two abused children living in a home on King Road; one child was said to have a broken collar bone and another a black eye. These injuries were said to have been caused by the mother’s live-in boyfriend. 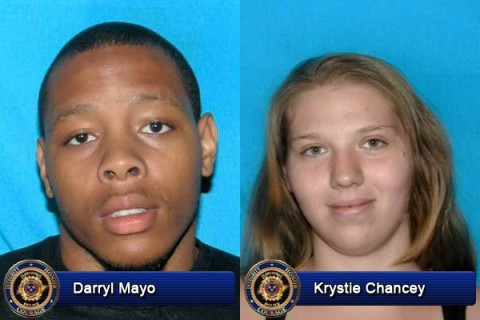 The mother of the children, Krystie Chancey, was interviewed and information was obtained about one of her children being seen at Gateway Medical Center for a broken collar bone.

Sometime after March 27th, 2013 another child (victim 2/ 1 year old male) was also abused by the same live-in boyfriend Darryl Mayo, whom had abused victim 1 the month before. Victim 2 had a significant bruise to his eye leaving what would be considered a “Black Eye”.

All information was corroborated by interviewing Mr Mayo who admitted to causing the broken collar bone to victim 1 while giving him a spanking. Mr Mayo stated that he and Ms Chancey made up a story together on how the children were injured to protect themselves from prosecution.

Mr Mayo also admitted to back handing victim 2 causing a significant bruise to his eye. Ms Chancey was advised of her Miranda Rights and further interviewed.

Ms Chancey advised that the injuries to victim 1 happened on a playground, and victim 2 was assaulted by one or more of his siblings, all of which are under the age of four years old.

Outcome of the Case: