You know it’s a bad day to be driving around Clarksville when even the Clarksville Street Department’s snow plow drivers occasionally needed a good Samaritan to come and get them unstuck with the icy roads that plagued our city yesterday.

As I drove around Austin Peay State University I spotted a Clarksville Street Department backhoe loader driving down Robb Ave. Since I was done at APSU I decided to follow and see what was going on. We didn’t have far to go. 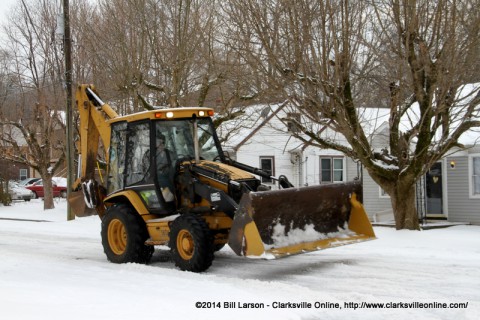 A Street Department snow plow had gotten stuck on the icy hill on Gill Street, which runs between Kraft Street and Robb Avenue. As the Backhoe Loader pulled up to the snow plow, I stopped about 50′ away and got out of my car. He set the edge of his loader bucket pointing straight down at the pavement busting through the ice to the asphalt to ensure his traction. The driver then extended his backhoe bucket towards the stuck snowplow. 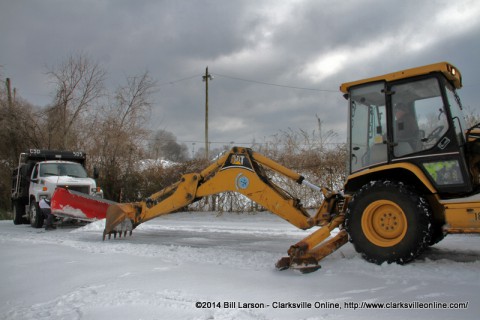 The stuck snow plow and the backhoe loader

Another Street Department worker attached chains from snowplow to the backhoe’s bucket. As he did so I asked the backhoe driver if he had done many of these extractions today. He replied quite a few, but before I could get any further information they were ready to go and so I backed clear to give them plenty of room.

The snow plow is freed

With a flick of his wrist the driver of the backhoe moved his controls and pulled the stuck snowplow forward freeing him. Once freed the chains were quickly removed and the backhoe was on his way.

The snow plow backed down Gill Street until he had a decent starting run and he headed back to the same hill he had been stuck on shortly before. This time however he was ready dropping his plow and cutting a swath through the snow and ice. With his momentum assured the truck had no further problems getting to the top of the hill before he continued on his way. 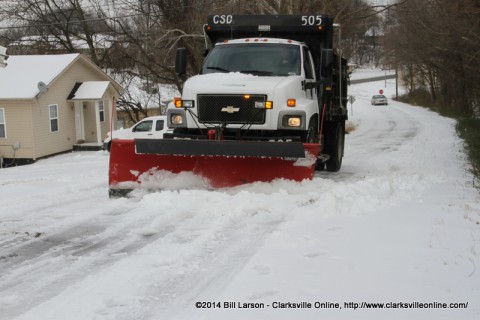