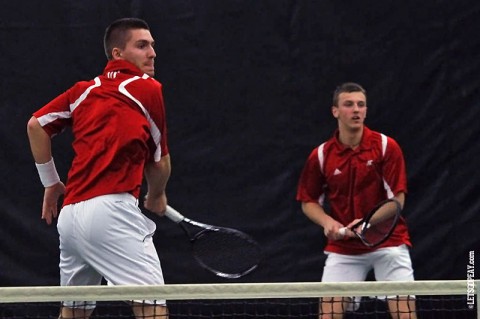 The Govs have been on an extended hiatus since their last outing against Lindsey Wilson College, March 1st. Austin Peay’s 5-2 mark was the best by an OVC school during the preseason non-conference portion of the schedule.

Austin Peay’s line-up will get a big boost with the return of senior Jasmin Ademovic this weekend. Sidelined since mid-February, the return of Austin Peay’s presumptive No. 1 adds the preseason’s top player in the OVC to an already stout line-up.

In Ademovic’s stead, a number of Govs have elevated their play. Junior Dimitar Ristovski has won all three matches at No. 1 while filling in for Ademovic, while junior Aleksas Tverijonas remains unbeaten in seven matches this season. Freshman James Mitchell went 2-1 upon moving up to No. 4 as well.

The Gamecocks enter play at 6-5 overall, 1-0 in the conference after knocking off Eastern Kentucky in the only OVC match last weekend. Replacing the departed Igor Santos, sophomore Pedro Wagner has struggled at No. 1 singles (3-8) but has been helped by the quick development of freshmen Mathias Chaim, Dylan Gee, Jaryd Reese and Jefferson Wendler-Filho.

Last season’s regular-season champions, Tennessee Tech misses the contributions of 2013 OVC Player of the Year Syrym Abdukhalikov and all-OVC first-teamer Alejandro Augusto. The Golden Eagles enter the weekend 1-8 overall, with only a February 28th victory against Lipscomb in the win column. Sophomore Oleksiy Arovin, who transferred to Cookeville from Oklahoma State last season, is 7-1 overall but no other Golden Eagle has more than two victories during spring singles play.

The Govs host Middle Tennessee in a 2:00pm, March 20th non-conference matchup before returning to OVC play at Belmont (10:00am, March 22nd).