Clarksville, TN – Austin Peay State University’s softball team will open up the Ohio Valley Conference part of its 2014 schedule this weekend, when they to Illinois to face the SIU Edwardsville Cougars.

The two teams will play a three-game series, starting with a 1:00pm Saturday doubleheader at Cougar Field and conclude with a single game on Sunday, also starting at 1:00pm.

Sophomore Mel Pavel is also off to a solid start at the plate, hitting at a .317 clip, with three doubles and a team-high 16 RBI.

Junior Laurel Burroughs is also coming into the weekend coming off her best week of the season, authoring a .333 batting average this past week – including blasting three home runs in those four games. 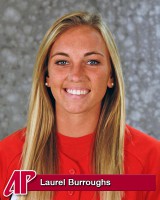 For SIUE, they have no players hitting over .300 so far this season, but are led by Haley Chambers .294 batting average – while Allison Smiley leads the Cougars with 12 RBIs.

Much like the Lady Govs de Castro, Chambers not only leads the Cougars at the plate she also their top pitcher with a 3-10 record, with a solid 2.69 ERA and 66 strikeouts in 86 inning pitched so far this season.