Clarksville, TN – It was cool outside Friday, March 14th, but the bats were hot at Northeast High School when the Eagles hosted the Montgomery Central Indians. The baseball diamond echoed with the distinct “tink” of metal hitting rawhide as the two teams lit up the score board.

However, when the last echo from the last hit died after seven innings, it was the Indians’ bats smoking in victory. The Indians earned their first win of the season, 10-5, over the Eagles. 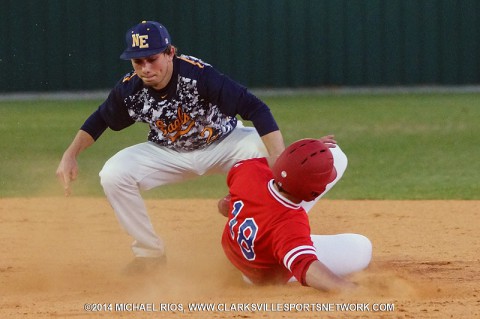 Pitchers from both teams had a tough night. Batters were making contact early and often throughout the game. The difference came down to defense. The Eagles made defensive errors late that let the Indians turn a one run lead into a route.

The two teams combined for 18 hits. The Indians scored four runs from three hits in the last inning to seal the win.

Jesse Beck drove in two of those runs when he hit a hard grounder pass the Eagles second baseman with the bases loaded. Beck hit 4-for-5 on the night, with three singles and the 2 RBI-double in the seventh.

Beck was one of six Indians to get a hit in the game.

Before the seventh inning, the Indians held a 6 to 5 lead for two innings. They scored three runs in the first, added two in the third and one in the fourth.

The Eagles countered with three runs in the second and closed to within one with two runs in the bottom of the fourth.

The Eagles were on their fourth pitcher when Beck drove in the two runs. They went to a fifth, Justin West, hoping to end the Indians late run. But West added another run with walks, then got tagged for one more when Clayton Walker hit his third RBI of the game.

Walker hit 3-for-5 in the game with 3 RBI singles.

Three Eagles pitchers combined for 3 hits, four walks and no strike outs in the seventh. Eagles starting pitcher Ryan Ellis allowed 5 runs from 6 hits, and walked three with no strike outs in 2 1/3 innings on the mound.

Indians pitcher, Gavin Bellar, took the mound late in the fourth inning and held the Indians one-point lead until the seventh. Bellar allowed 2 runs, 1 hit and struck out one in 2 1/3 innings of work.

Up by five runs in the bottom of the seventh, T.J. Sawyer closed the game for the Indians, striking out two and retiring the third with a ground out.