Naples, FL – With senior Marco Iten shooting a 3-under 69 and tying for medalist honors, Austin Peay State University emerged from the Talis Park Challenge with an impressive third-place finish, Tuesday, played in windy conditions at the Talis Park Golf Club.

It was Iten, the senior from Niederglatt, Switzerland, who led the way shooting a 1-under 215 (73-73-69) for the tournament. Tying with Vanderbilt’s Carson Jacobs, he defeated five players ranked in the NCAA’s top 250, according to the latest GolfStat rankings. He birdied two of his first five holes played before bogeying No. 9. It was the lanky senior’s only bogey on the day. He collected back-to-back birdies on Nos. 15 and 16 before achieving par on his final five holes. 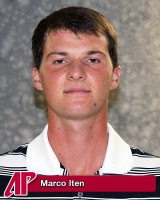 The 69 was Iten’s third sub-70 round this season—his first of 2014. The medalist title was his second—his first came at the 2011 F&M Bank APSU Intercollegiate.

“It was just simply a phenomenal performance by Marco,” APSU coach Kirk Kayden said.  “For him to shoot a 69 in the conditions we had today—the winds again were 30 miles per hour and the greens were playing so fast—it was just unbelievable.

“He had just one bogey today and in these conditions that was just incredible. To think he shot a 69 and the field average was around 78, that tells you the way he was playing today and this entire weekend.” 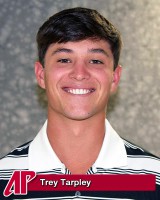 “The guys did a good job of finishing off a round—it was something we talked about in the van after Sunday,” Kayden said. “We got off to a rough start today and were down to fifth at one point but the guys were able to pull it together, get some clutch pars on the final holes and get us to third. It should do a lot for our confidence as we head down the road.”

Kayden was particularly pleased with the Govs beating Notre Dame, clothed in St. Patrick’s Day green, and Indiana, along with his own alma mater, Toledo.

“It was a little strange to see the Toledo logo on the bags,” Kayden said. “We have played in tournaments with them before but this was the first time we ever have been paired with them.

“And to be able to beat Notre Dame on St. Patrick’s Day, we had to be doing something right today.”