Clarksville, TN – Austin Peay State University athletics has announced it has extended the contract of head women’s basketball Carrie Daniels through the 2014-15 season.

The young 2013-14 Lady Govs posted a 9-20 overall record and 6-10 mark in the Ohio Valley Conference, narrowly missing qualification for the league tournament.

In 2013-14, APSU featured a team that possessed just two seniors with a quartet of freshmen and a pair of sophomores gaining a lion’s share of Lady Govs playing time.

In fact, freshman post player Tearra Banks was named to the OVC All-Newcomer team—the fifth to earn such honors under Daniels. 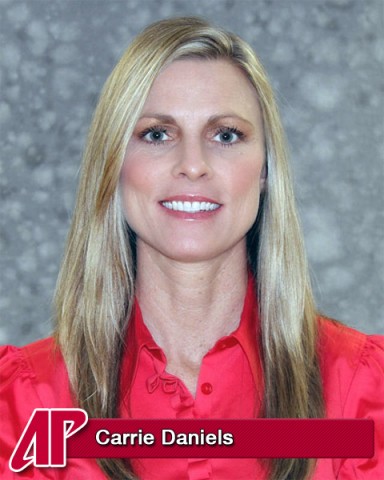 “Carrie Daniels and I have met and have completed a comprehensive review of our women’s basketball program. As a head coach she has developed teams that have won championships, maintained exceptional performance in the classroom with a cumulative team grade-point average of 3.44 and recruited student-athlete who are outstanding members of our community,” said Director of Athletics Derek van der Merwe. “We both agree we need are not satisfied with the team’s overall win-loss record. I support Carrie’s vision and plan to improve these results.”

During Daniels tenure, APSU has reached the OVC tournament five times, including winning the tourney title in both the 2008-09 and 2009-10 seasons. In fact, she is the only coach in Lady Govs history to own OVC titles as a player (1995-96) and coach.

The 1996 APSU alum has been at the Lady Govs helm for more games (245) and seasons than any Lady Govs basketball coach in program history. In eight seasons, APSU is 88-157 under Daniels, including 58-84 in OVC play.