In the day’s first game Austin Peay (9-13, 3-3 OVC) could not solve Jacksonville State starter Zach Fowler. The Govs had just one runner in scoring position through five innings as Fowler retired 15 of the first 19 batters he faced.

Austin Peay would break through against Fowler in the sixth as right fielder Rolando Gautier walked to start the inning and scored on first baseman Dre Gleason’s sacrifice fly.

Jacksonville State (14-9, 6-3 OVC) struck for four runs in the first two innings against APSU starter Levi Primasing. The Gamecocks scored two in the first, including a run courtesy an error. JSU added two runs in the second as center fielder Michael Bishop drove in a run with a sacrifice bunt and designated hitter Paschal Petrongolo added a run with a single.

That 4-0 lead would hold up as the Govs scored the run in the sixth and added a leadoff home run by Ridge Smith in the seventh for its only two runs of the contest. Jacksonville State would add insurance with a two-run sixth – catcher Daniel Gaither leading off that frame with a  home run – and another run in the eighth.

Fowler (4-1) picked up the win after holding the Govs to one run on four hits in six innings, striking out four. JSU reliever Graham Officer notched his season’s first save with three innings of relief, allowing one run.

Austin Peay’s offense broke out for four runs in the first four innings of the nightcap and led 4-1 after four frames. Catcher P.J. Torres got the Govs on the board with a two-run home run in the second. Austin Peay used an error to plate a run in the third and center fielder Cayce Bredlau drove in a run in the fourth.

However, Jacksonville State struck for seven runs in the sixth inning. The Govs started the inning by retiring two of the first three batters in the frame. But the Gamecocks sent 10 men to the plate with two outs as the Govs walked six batters. Pinch hitter Joe McGuire had a two-run double and left fielder Gavin Golsan had a two-run double in the inning, which ended with JSU leading 8-4.

Austin Peay struck for three runs in a wild seventh inning. The Govs saw their first four batters reach base, third baseman Alex Robles walking with the bases loaded for the inning’s first run. Austin Peay saw the next two batters fail to push in a run until designated hitter Kevin Corey laced a two-run single to center field, narrowing the deficit to one run, 8-7.

Jacksonville State would get back one of those runs in its half of the seventh. Right fielder Griff Gordon tripled to start the inning and scored on a Petrongolo single, setting the game’s final score. 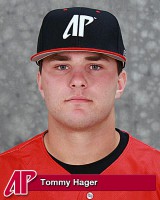 Govs reliever Tommy Hager suffered the loss after hitting the only batter he faced and seeing that run ultimately score in the seventh. Starter Caleb Powell, making his first OVC start, held Jacksonville State to one run on six hits in 4.1 innings.

Third baseman Alex Robles led the Govs offense with three hits, including a double and a RBI in the doubleheader. Corey and Torres each had two RBI in the twin bill.

Golsan led Jacksonville State with a 5-for-7, two RBI effort in the doubleheader. Gordon went 6-for-9 with two RBI. Ten different JSU hitters recorded a RBI in the twin bill.

Austin Peay returns to action as it faces Evansville and a pair of midweek games. The Govs travel to Evansville for a 6:00pm, Tuesday contest before hosting the Purple Aces in a 6:00pm, Wednesday contest.