Clarksville, TN – After opening its outdoor season at a pair of Southeastern Conference home meets, Austin Peay State University women’s track and field team will stay close to home in the season’s third week when it travels to Murray, KY, for Friday’s Margaret Simmons Invitational. 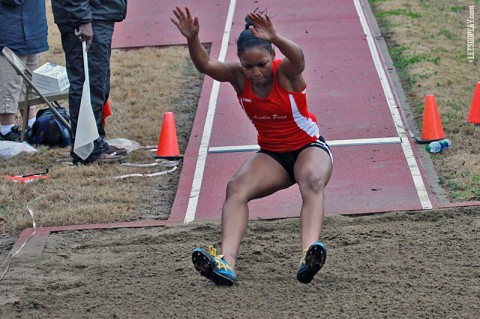 The Lady Govs have seen an influx of freshman talent during this season, with seven ranking in the top five in the Ohio Valley Conference in their respective events entering the weekend.

Both Kaylnn Pitts (triple jump) and Briana Kelly (high jump) lead the conference in their specialties, while Amia Butler and Chancis Jones rank second and third in the long jump.

A pair of relay squads both enter the weekend ranked behind Tennessee State, with the 4x100m quartet just two-tenths of a second off the Tigers pace. Austin Peay sends three 4x100m squads and  four 4x400m contingents to Murray State this weekend.

The sprints get a shot in the arm with the return of sophomore Breigh Jones. The Memphis native was forced to sit out last weekend’s meet at Vanderbilt with a hamstring injury, but will be back in action this weekend – Jones leads the conference in the 400m dash.

Although the celebrated underclassmen have received well-deserved recognition in the early weeks of the outdoor season, a host of veterans are making late-career pushes for glory.

Outdoor season continues for the Lady Govs next weekend at the WKU Invitational.