HomeEventsAPSU Department of Theatre and Dance to put on "Dark of the...
Events

Clarksville, TN – Long before the “Twilight” saga or “Buffy the Vampire Slayer” examined the complicated relationships between mortals and monsters, there was the story of a young witch named John who fell in love with a human girl named Barbara.

Their doomed affair, set in a superstitious community in the Smokey Mountains, is the focus of Howard Richardson and William Berney’s 1945 play “Dark of the Moon.” 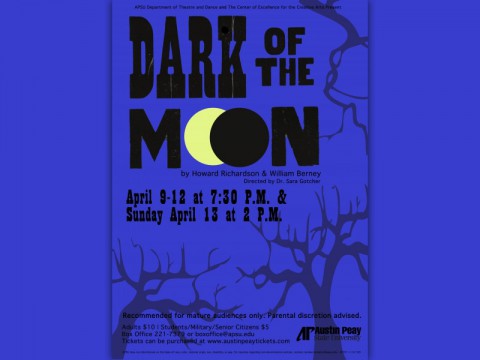 The popular drama opens at 7:30pm on April 9th, in the Austin Peay State University Trahern Theater and runs through April 12th, with a matinee at 2:00pm on April 13th.

The play, directed by Dr. Sara Gotcher, associate professor of theatre, will bring to an end the APSU Department of Theatre and Dance’s 2013-2014 season.

“Dark of the Moon,” with its supernatural elements, is considered a folk fantasy, with much of the dialogue incorporating an Appalachian dialect. It premiered on Broadway in 1945. The play is recommended for mature audiences.