Clarksville, TN – the Roxy regional theaters currently staging their production of the Victor Hugo Classic Les Misérables. Called Epic, grand and uplifting, Les Misérables has captured the hearts of audiences around the world with its powerful affirmation of the human spirit. The Musical is running through May 10th.

Will Sevier stars as the noble Jean Valjean, who has been released after 19 years of unjust imprisonment in pre-revolutionary France, only to find nothing in store for him but mistrust and mistreatment. Breaking his parole in hopes of starting a new life, he initiates a life-long struggle for redemption during which he is relentlessly pursued by police inspector Javert (played by Donald Groves), who refuses to believe criminals can change their ways. 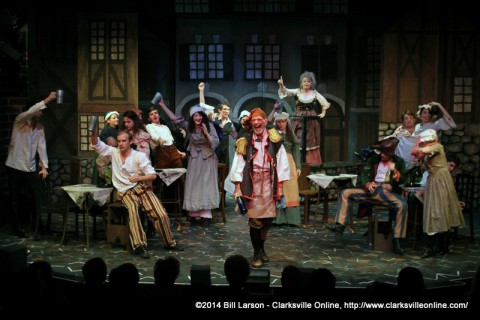 The Master of the House

At the End of the Day

Attending the showing on Wednesday night, I was very impressed by the production. I had read the the novel, seen both the drama and the musical movie adaptations of the show, as well owning a copy of Les Misérables in Concert: The 25th Anniversary edition. You could say that I know this show like the back of my hand.  So believe me when I state that the Roxy’s adaptation blew me away; The vocals were strong, I could easily have mistaken the live show, for a Broadway cast album. It is that good. I can’t say enough good things about this cast. John McDonald and Tom Thayer always casts their shows spot on

John McDonald and Jama Bowen however brought a special magic to their portrayal of the Thenardiers as you can see in the photo gallery below. Master of the House has long been one of my favorite numbers from this show!

I also love when I get the opportunity to see amateur actors being given the chance to work with professional actors. In this case Kylan Elizabeth Ritchie portrayed young Cosette; Riley Jenkins was an excellent Gavroche. 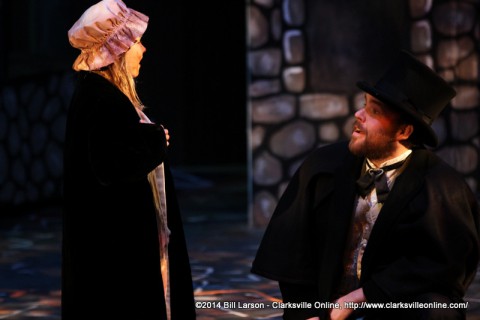 Tickets are $25.00 (adults) and $15.00 (ages 13 and under) and may be purchased online at www.roxyregionaltheatre.org [2], by phone at 931.645.7699, or at the theatre during regular box office hours (9am to 2pm, Monday through Friday, and one hour prior to curtain). Active-duty military, APSU students and CitySaver coupon holders can receive two tickets for the price of one to Wednesday and Thursday performances.