Mason Robinson (9-6) picked up her second win of the weekend for the Racers against the Lady Govs (18-24, 6-10 OVC), taking a perfect game into the fourth inning, before Kayla Davidson broke things up with a single.

Robinson, along with giving up three hits, didn’t walk a batter and struck out five.

Murray State (24-18, 11-5 OVC) jumped out to a quick lead, with leadoff batter Shelbey Miller being hit by a pitch, move to second on a wild pitch and third on a single by Mo Ramsey. 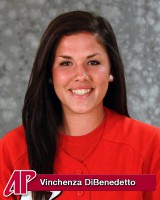 Miller would then score on a sacrifice fly by Alexa Becker for the 1-0 advantage.

The score would remain that way until the third inning, when the Racers loaded the bases on back-to-back singles by Miller and Ramsey, followed by a walk to Becker — with one out.

That would bring up Leslie Bridges who hit a ground ball to Lady Govs third baseman Vinchenza DiBenedetto in what looked like a routine play with a throw home to get the lead runner – if not a double play to get out of the inning.

But DiBenedetto’s throw home was wide allowing both Miller and Ramsey to score – making it 3-0. 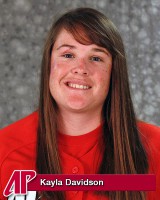 Murray State would make it 5-0 in the top of the fourth inning by adding two more runs, the first coming on a sacrifice fly by Miller and the other on an RBI single by Becker.

The Racers final run of the game came in the fifth inning on a double by Jocelynn Rogers, driving in Cayla Levins who reached on a base on balls.

Lauren de Castro (12-10) took the loss, giving up six runs – two earned – on seven hits, while walking two and striking out one

Austin Peay’s best chance of scoring came in the bottom of the fourth inning with Davidson and Mel Pavel getting on with back-to-back singles, but de Castro hit into a fielder’s choice followed by DiBenedetto going down on strikes to end the threat.

The Lady Govs will return to action this Friday, as they start their final road swing of the season – a stretch of seven games – with a noon doubleheader at Morehead State.