Austin Peay (19-29, 11-12 OVC) could not break the game open as Morehead State responded to each Govs score to force four ties through six innings. After Morehead State tied the game 7-7 in the sixth, neither team scored in the seventh or eighth innings.

The Govs started the ninth with third baseman Alex Robles’ single through the left side. One out later, left fielder Ridge Smith singled through the left side moving pinch runner Chase Hamilton to second. Both runners advanced thanks to a passed ball that proved crucial.

Morehead State (24-22, 12-11 OVC) went to Craig Percy, its closer, after the passed ball and to face catcher P.J. Torres. The tie would not survive Percy’s first pitch which Torres bunted down the third base line, allowing Hamilton to score on the squeeze as Torres reached first safely.

With runners on the corners, Austin Peay turned to its basepath trickery to pad its lead. The Govs executed a delayed double steal, with Torres safe at second and Smith scoring thanks to a throw in the dirt at second by the Eagles catcher. The Govs would not add to their 9-7 lead as the next two batters struck out. 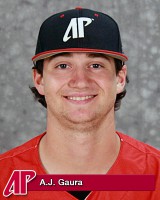 Morehead State threatened to tie the game in its half of the ninth. Austin Peay relief pitcher A.J. Gaura hit third baseman Jeff Birkofer to start the frame then allowed a one-out walk to shortstop Blaine Tanner. Gaura would get the second out before allowing a RBI single to second baseman Tyler Bigler, ending Gaura’s outing.

Gaura (3-1) picked up the win after allowing one run in 1.2 innings. Belew notched his first save. The Govs used seven pitchers in the contest after starter Jared Carkuff started but could not finish the third inning.

Third baseman Alex Robles went 3-for-5 with one RBI to lead the Govs 13-hit offense. Right fielder Rolando Gautier, Gleason and Smith each had two hits. Gautier and Gleason also had two RBI each.

Morehead State reliever Matt Ellenbest (1-1) was tagged for the loss after allowing two hits to the three batters he faced in the ninth, ultimately allowing two runs. The Eagles used six pitchers in the contest as starter Matt Anderson started but could not finish the fourth inning.

Bigler led the Eagles 12-hit offense with a 3-for-6, one RBI effort. Sweeney and Birkofer each had two hits.

Austin Peay and Morehead State, which won Friday’s series opener, will play the rubber game of their three-game OVC series with a 1:00pm (ET), Sunday contest.