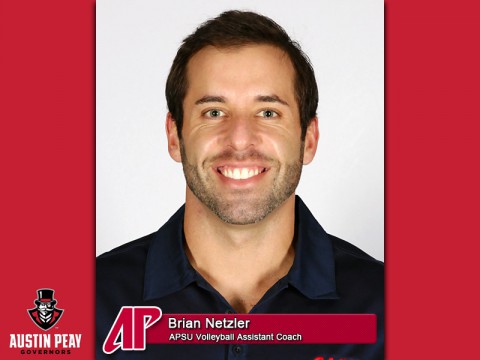 He joined the Rebels program after four seasons (2009-12) as assistant women’s volleyball coach at Grand Valley State in Michigan. While at GVSU, Netzler helped guide the Lakers to three NCAA Division II tournament appearances, including an Elite Eight berth in 2010.

“We are excited to add Brian to our coaching staff,” said Mott. “He is an energetic person who will bring the best out of our student-athletes. Brian has experience coaching on many different levels, which is something that sparked my interest in him initially. Everyone I have spoken to about Brian describes him as a tireless worker, a gym rat, volleyball junkie and someone who has dedicated themselves to becoming a teacher and mentor to student-athletes.”

“I’m excited and blessed to be a part of the Austin Peay volleyball program, athletics department and university,” said Netzler. “From the moment I stepped on campus, I knew Austin Peay was positioned for growth and success. I want to thank Athletics Director Derek van der Merwe, senior woman administrator Cheryl Holt and coach Mott for this opportunity.”

Netzler actively has been involved with the Michigan Volleyball Academy since its inception in 2007. In his seven seasons with MVA he has coached teams to national top 10 finishes each season, including leading the MVA 15-year old team to the 2010 Junior Volleyball Directors Association National Championship for its age group. He also was a coach for several high school programs prior to joining the Grand Valley State program.

A 2009 graduate of Grand Valley State, Netzler was a member of that school’s club volleyball team while a student and was part of that program’s first-ever conference title and a top 25 club ranking in 2007.