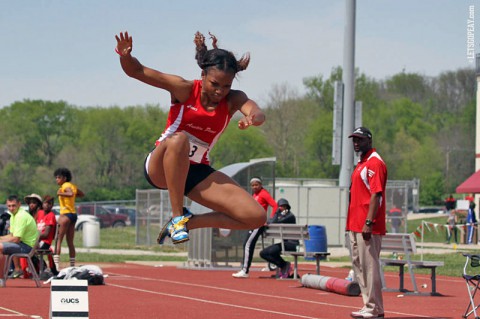 Austin Peay has not had more than two athletes attend the regional round of the NCAA Championships since the governing body adopted the current regional format in 2010.

Two Lady Govs have to be feeling pretty good about their odds as they enter the weekend. Freshman Kaylnn Pitts already sits 32nd regionally in the triple jump at 12.63m (41’ 5.25”), comfortably inside the top-48 ranking necessary for a trip to North Florida.

She’ll almost certainly be joined by sophomore Breigh Jones, who seeks her second trip in the 400m dash – she ranks 40th entering the weekend after winning gold at last week’s OVC Outdoor Championships.

Freshman Terri Morris is following the path laid down by Jones last season, reaching her stride as the season draws nearer to regionals. She ranks 77th entering the weekend at 54.75, tied for 14th among freshmen in the region.

Freshman Brianna Kelly stands a good chance of joining Pitts as Lady Gov field representatives, but she’ll need to break an Austin Peay record that’s stood since the turn of the century. Kelly’s 1.70m (5’ 7”) mark is an inch behind the record first set by Felicia Hill and equaled by Lisa Addison and Lauren Maul, and would still be three-quarters of an inch short of qualifying as marks stand entering the weekend.

Xiamar Hudson will be the only senior to represent Austin Peay in the field at the Spec Towns Track, Saturday. She’ll run the 1500m event after breaking the school record on her way to bronze at the OVC Championships with a 4:34.95 run.

Austin Peay returns to the Peach State again next weekend, heading to Atlanta for the Georgia Tech Invitational.