“A walk and shoot is designed to allow the fires team to develop their capability to integrate joint fires with the maneuver commander’s operations,” said Maj. Dominic Larkin, the 1st Brigade fires support officer and officer in charge of the walk and shoot.

“This walk and shoot was designed for a company to execute without troops, so it was commanded by a company-level commander and he brought his machine gun teams with platoon leaders and fire supporters,” Larkin said. 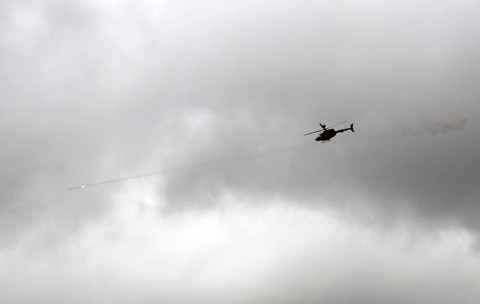 Some of the different assets the units were provided were the JTAC and OH-58 Kiowa helicopters providing close air support, 155mm and 105mm artillery, and 120mm, 81mm and 60mm mortars, according to Larkin.

The walk and shoot began with each company breaking off into three platoons. Each platoon then maneuvered from either the right or left side or down the middle of the lane. 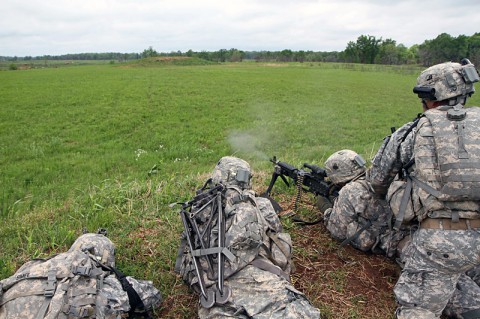 After all the platoons made it to the third berm and reached their objective, they then provided each other with covering fire as they maneuvered their way back.

Once the training was completed, they cleared weapons and marched off the range to conduct an after action review, which was followed by a key leader engagement with role players acting as Afghan locals.

Following the KLE, the company then left the range, having successfully completed their training.

“I think the training went pretty well,” said Sgt. Andrew Titus, a squad leader with Company B, 2nd Battalion, 327th Infantry Regiment, who had just conducted his first walk and shoot. “A lot of the younger guys got to get some experience to see all the different assets we’re able to attain while we’re out there.” 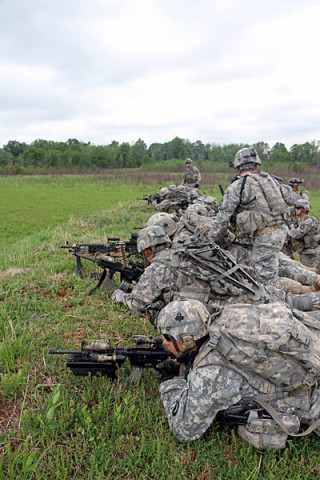 Titus said the most challenging part of the walk and shoot for him was learning how to adjust rates of fire, from sustained to rapid, in order to maintain ammunition to complete the mission.

Titus also said he enjoyed the training, especially seeing all the different assets come into play together.

“A lot of these Soldiers have never seen this, they never seen it up close, they’ve never seen multiple assets engaging a single target,” said Larkin. “The realism that it provides from having all these support units show up, it was a very high payoff.”

“I have a better understanding; I see the bigger picture now after doing the walk and shoot,” said Titus.