In a stout field that featured stand-out athletes from Clemson, Florida State, Georgia Tech and other top schools in the southeast, several Austin Peay athletes moved themselves into position for spots in the NCAA East Preliminary field, May 29th-31st in Jacksonville, Florida. 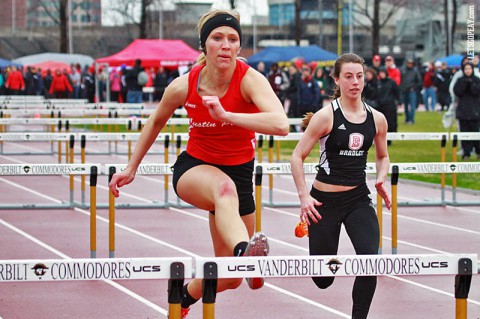 No Austin Peay athlete stood out more this weekend than freshman Brianna Kelly.

The Northeast High School alum moved herself up the lists in the regional high jump standings, hitting a career-high 1.71m (5’ 7.25”) to finish fifth. She now ranks 69th regionally, with an outside chance at a Florida appearance based on which eligible athletes declare for the high jump.

“Brianna’s made herself one of the premier high-jumpers in the conference,” said head coach Doug Molnar. “She was one of the top collegiate competitors in a very strong field and has such a bright future ahead. She put up a personal-best in conditions that weren’t optimal.”

Sophomore Breigh Jones was finally bested in the 400m dash at George C. Griffin Track. In an event sprinkled with the region’s top runners, Jones finished 11th in the 44-runner field at 54.11, ahead of four top-48 regional performers, despite being slowed by hamstring tightness.

In hurdles action, junior Natalie Olberding’s season-best 1:01.87 run moved her up a spot in the regional rankings to 124th and send her into the offseason before her senior campaign on a positive note.

In the 200m dash, sophomore Kymmalett Ross shaved two-tenths of a second off her personal best with a 24.29 run, finishing 13th out of 40 runners.

“We’ve got a chance to get a few in the field, depending on who declares,” Molnar said. “I was really impressed with how well we handled ourselves in a big field this weekend.”