Nashville, TN – The Nashville Sounds snapped a two-game skid with a 10-4 victory over the Oklahoma City RedHawks on Saturday evening at Greer Stadium.

Left fielder Sean Halton enjoyed a big night for the Sounds, going 2-for-4 with a triple, double, and career high-tying five RBIs. The red-hot slugger is batting .444 (16-for-36) over his last 12 games.

Every Sounds player contributed to the 13-hit attack except shortstop Hector Gomez (0-for-5). 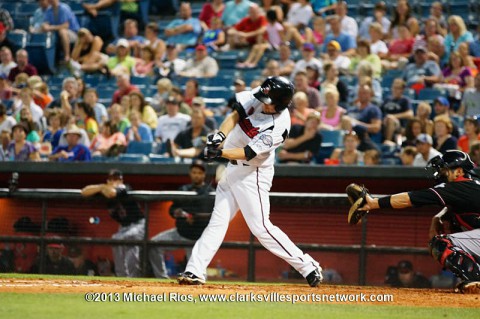 The Sounds got on the board in the home half of the third, sending 10 batters to the plate to put up five runs against Oklahoma City starter Rudy Owens. The outburst matched Nashville’s biggest inning this season.

Nashville filled with bags on a Taylor Green double followed by a pair of walks drawn by Eugenio Velez and Caleb Gindl before Halton dropped a bases-clearing, three-run double down the right field line.

Hunter Morris followed with an RBI single up the middle to bring home Halton for a four-run cushion. Later in the frame, catcher Matt Pagnozzi floated a run-scoring single to left-center to drive home Morris for a 5-0 Nashville advantage.

The RedHawks got three runs back with a two-out rally in the top of the fourth against Nashville reliever Alfredo Figaro (1-1), who picked up his first victory of the year. After the first two batters were retired, Oklahoma City recorded three straight singles then drew back-to-back walks, the second of which coming with the bases loaded, to cut the Sounds’ lead to 5-3.

The Sounds responded with four runs of their own in the bottom of the fourth to extend the lead to a comfortable 9-3. Irving Falu (2-for-3), Velez, and Gindl started the inning with consecutive singles to bring in one run and chase Owens from the contest.

Halton continued his big night by greeting Oklahoma City reliever  Raul Valdes by drilling an RBI double to left to score Velez. Morris plated Gindl with a sacrifice fly before Jeremy Hermida (2-for-4) closed out the four-run outburst with a two-out RBI single to left to bring in Halton.

Owens (2-3) was tagged with the loss after surrendering eight runs on nine hits in his three-plus innings of work.

Oklahoma City pulled closer in the seventh when Domingo Santana led off with a single and scored on Gregorio Petit’s one-out single that made it a 9-4 contest and ended Figaro’s night.

The Sounds will look to gain a split of the four-game set when the teams play a 2:05pm matinee finale on Sunday afternoon at Greer. Milwaukee Brewers top prospect Jimmy Nelson (4-1, 1.76) will toe the slab for the Sounds to face Oklahoma City right-hander Mike Foltynewicz (3-2, 4.00).

Owens pitched to 3 batters in the 4th.