Nashville, TN – The Nashville Sounds continue their #LastCheerAtGreer with the team’s fifth homestand of the year at Greer Stadium, which begins this Monday, June 9th. 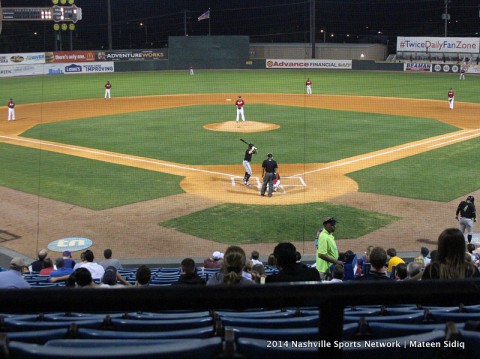 The Sounds open their homestand against Reno on a SeatGeek.com Dollar Monday, which provides fans a $1.00 ticket offer with the purchase of a regularly priced ticket by showing their SeatGeek.com mobile app at the box office. In addition, concessions will sell hot dogs for just $1.00 apiece courtesy of SeatGeat.com.

The Nashville Sounds and Twice Daily are partnering up every Tuesday this season to provide fans a special two-for-one ticket offer. On game day, bring an in-store receipt from Daily’s or Twice Daily to the Advance Financial Box Office to receive the offer.

Great Clips #WebWednesdays reward fans that follow the Sounds on Facebook, Twitter and Instagram with special offers. Fans can also receive $5.00 off a general admission ticket by presenting a Great Clips receipt at the box office (up to two per receipt).

The Sounds begin their four-game series with the Rainiers on Friday, which marks the team’s third Trevecca Nazarene University FAITH NIGHTS ®. A pregame concert performance by MIKESCHAIR will take place on the plaza stage near the first-base entrance approximately one hour before first pitch.

The night will conclude with an impressive Friday fireworks display.

The first 2,000 fans to come through the gates on Saturday will receive a Sounds T-shirt featuring the “Slugger” logo courtesy of Vanderbilt Sports Medicine.

A spectacular fireworks show will follow the game, presented by Nashville’s NEWS 2.

Sunday’s contest will mark Greer’s last day game of the season. A pair of Sounds players and Ozzie will be available for autographs inside the main gate one hour before first pitch.

Fans are encouraged to celebrate Father’s Day at Greer Stadium, as all fathers and sons in attendance will have the opportunity to play catch on the field after the game as a part of the team’s Father’s Day Celebration presented by Sport Clips. All fans who come through the gates on Sunday will also receive a coupon from Sport Clips.

Every home Sunday game at Greer this season will be a Military Sunday presented by Piedmont Natural Gas and Tennessee 811. The Sounds will wear camouflage jerseys, while servicemen/women, veterans, and their families receive $5.00 off reserved or general admission tickets with a valid Military ID; limit 5 discounted tickets per ID.

Also taking place each Sunday will be Faith and Family Sundays, where fans can receive $5.00 off tickets by presenting a church or community bulletin at the Sounds Advance Financial Box Office; limit eight discounted tickets per bulletin.

Finally, Ozzie’s Fit and Fun Club, presented by The Tennessean, continues its season Sunday. Ozzie’s Fit and Fun Club is a program for children of all ages, offering unique opportunities and loads of fun every Sunday home game at the ballpark. Memberships are $15.00 and include a t-shirt, water bottle, draw-string bag and Sounds tickets.

The Sounds will conclude the homestand with another SeatGeek.com Dollar Monday. Fans are eligible for a $1.00 ticket offer with the purchase of a regularly priced ticket by showing their SeatGeek.com mobile app at the box office. In addition, concessions will sell hot dogs for just $1.00 courtesy of SeatGeat.com.

Following the homestand, Nashville will head out west for an eight-game road trip that will feature four-game series against the Las Vegas 51s (New York Mets affiliate) and the Salt Lake Bees (Los Angeles Angels Affiliate). The Sounds will then return to Nashville and begin their sixth homestand on Thursday, June 26th, when they host the New Orleans Zephyrs (Miami Marlins affiliate) and the Memphis Redbirds (St. Louis Cardinals affiliate).

The team is asking fans to help say farewell to the venue it has called home for 37 years by coming to Sounds games this summer and using the hashtag #LastCheerAtGreer in social media.

Individual tickets and group packages are currently on sale. Fans can visit Greer Stadium, open weekdays from 8:30am to 5:00pm, call 615.690.HITS, or visit www.nashvillesounds.com [3] for more information.