Moffett Field, CA – Excitement is building for fans across the globe with today’s first match of the Fédération Internationale de Football Association (FIFA) 2014 World Cup tournament. These fans include NASA engineers, who used the lead-up to the tournament to test the aerodynamics of this year’s new ball design, developed by Adidas and dubbed the Brazuca ball.

Although NASA is not in the business of designing or testing balls, the tournament provides an opportunity to explain the concepts of aerodynamics to students and individuals less familiar with the fundamentals of aerodynamics.

“Sports provide a great opportunity to introduce the next generation of researchers to our field of aerodynamics by showing them something they can relate to,” said Rabi Mehta, chief of the Experimental Aero-Physics Branch at NASA’s Ames Research Center in Moffett Field, California.

With this knowledge, engineers can predict how even the minor alterations in these basic shapes change flow patterns.

The previous World Cup ball, the Jabulani, was described as sometimes demonstrating “supernatural” movements. It was beloved by strikers but hated by goalkeepers because, when kicked with little or no spin, the ball “knuckled,” giving strikers a greater chance of scoring.

Knuckling occurs when, at zero or near-zero spin, the seams of the ball channel airflow in an unusual and erratic manner making its trajectory unpredictable.

Taking full advantage of a ball’s flight characteristics to gain an advantage is nothing new in sports. In baseball, the only difference between a curveball, a fastball, a slider or a knuckle ball is how a pitcher manipulates the spin of the baseball with respect to its stiches. On a football, there are no external stiches piecing the outer covering of the ball together but it does have seams, many of them.

To address the unpredictability of the Jabulani ball, Adidas worked with hundreds of players to develop the Brazuca football. A traditional football has 32 panels, the Jabulani has eight panels and the Brazuca has only six.

Despite having fewer panels, the finger-like panels on the Brazuca increase the seam length, compared to previous World Cup balls. The seams are also deeper than those of the Jabulani and the panels are covered with tiny bumps; all of these factors influence the ball’s aerodynamics. 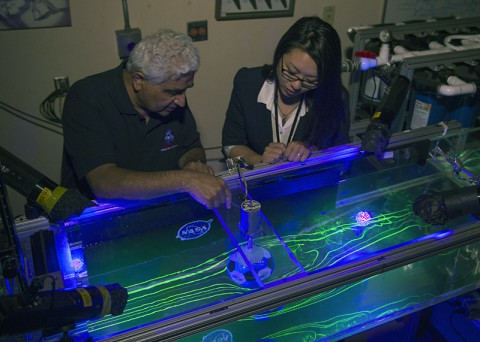 What seems like common sense about air moving around a simple sphere does not, in fact, bear true. The airflow around a sphere is not smooth; a great amount of drag is created behind the object.

An example of this can be seen on a golf course, where a smooth golf ball travels much shorter distances than a regular, dimpled golf ball. The dimples on the ball’s surface agitate the air creating a smaller low-pressure wake behind the ball and decreasing drag, therefore increasing its distance.

“There is a thin layer of air that forms near the ball’s surface called the boundary layer and it is the state and behavior of that layer that is critical to the performance of the ball,” said Mehta. “The materials used, the ball’s surface roughness and its distribution determines its aerodynamics.”

The overall increased roughness of the Brazuca football will help to decrease the ball’s knuckling tendencies at kicking speeds typically encountered in the World Cup.

In the 2-by 2-foot wind tunnel in the Fluid Mechanics Laboratory at Ames, Mehta demonstrates the airflow around the Brazuca football releasing controlled smoke flow over the surface of the ball highlighted with laser light to increase flow visibility. At different speeds, there are noticeable differences in airflow around the ball.

Tests in the wind tunnel and a 17-inch water channel, which uses florescent dye dispensed into the fluid flow under black lights, shows that the speed of greatest knuckling for a traditional ball is around 30 miles per hour (mph). This is well below the typical kicking speed of a World Cup-caliber player, which is about 50 to 55 mph.

Interestingly, the Jabulani, a much smoother ball, produced its greatest knuckling effect in that same speed range (about 50 mph), which is why the players in the 2010 World Cup noticed  the effect more frequently.

The smoother a ball is, the higher the speed at which the knuckling effect occurs. However, with the increased roughness of the Brazuca, this critical speed for maximum knuckling is reduced to about 30 mph. So it is expected that the 2014 World Cup ball will have a more predictable flight path at typical striking speeds. 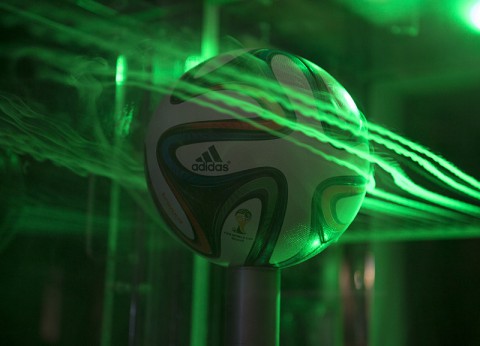 “The players should be happier with the new ball,” predicted Mehta. “It is more stable in flight and will handle more like a traditional 32-panel ball.”

Will this make the game less exciting? The answer is — no. With a new understanding of the aerodynamics of the Brazuca football, the audience, especially kids, can better appreciate the feats of skill on the field. Elite athletes will continue to manipulate the ball in amazing ways. They don’t have the terms like “Bend it like Beckham” for nothing.