He also was one of a program-record five Austin Peay baseball players named to the Louisville Slugger Freshman All-American Team.

Robles was a utility player selection by all three organizations, splitting his time between pitching and third base during the season.

Robles, of Tucson, Arizona, was the Ohio Valley Conference’s Rookie of the Year, a second-team All-OVC pick as a pitcher and a member of the league’s All-Freshman team. He appeared in 55 games, including 35 infield starts and 14 starts as a pitcher. 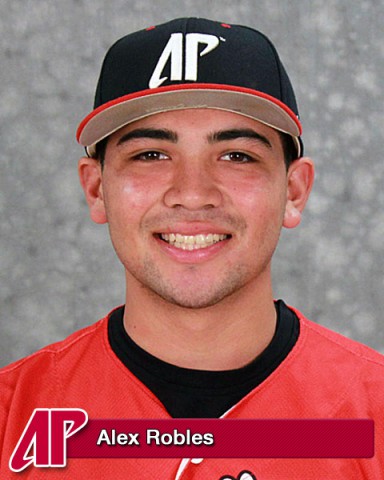 Robles led the Govs with a .349 batting average and his 39 RBI were second-most on the team. On the mound, Robles was equally dominant with a 6-2 record and 3.63 earned-run average while striking out 56 batters in 84.1 innings.

In OVC play, Robles batted .328 with 10 doubles and 24 RBI. However, as the Govs No. 1 weekend pitcher each week of league play, he went 5-1 with a 3.29 ERA and struck out 48 in 63 innings. He had back-to-back impressive starts near the OVC schedule’s midpoint.

Robles tossed a one-hit shutout at Belmont, April 17th, and garnered adidas® OVC Player of the Week honors and his performance was selected as one of the nation’s best by www.NCAA.com . One week later, he struck out 13 batters – tying the OVC season best – against Eastern Kentucky, April 25th.

It is the second time an Austin Peay freshman has earned Baseball America First-Team All-Freshman honors, equaling the recognition gained by Jordan Hankins in 2011.