Oklahoma City, OK – Sean Halton ripped a pair of doubles and drove in three runs to lead the Nashville Sounds to a 7-3 victory over the Oklahoma City RedHawks on Saturday evening at Chickasaw Bricktown Ballpark.

The Sounds grabbed a 2-0 lead in the top of the second inning against Oklahoma City starter Tommy Shirley. After Jeremy Hermida drew a leadoff walk, the red-hot Halton (2-for-4) plated him by driving an RBI double to left. Halton, who is hitting .400 (28-for-70) over his last 17 contests, later scored on a double play grounder. 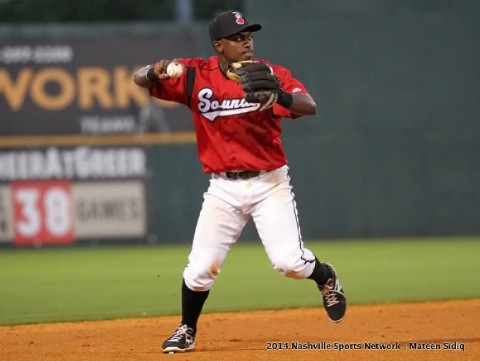 Oklahoma City halved the Nashville lead to 2-1 in the home half of the second against Fiers when Preston Tucker scored on a two-out RBI single off the bat of Max Stassi. The Nashville right-hander avoided further damage in the frame as he fanned Jiovanni Mier to strand runners at second and third.

Halton continued his solid night in the fourth when he ripped a two-run double to straightaway center to stretch the lead to 4-1. Jason Rogers and Jeremy Hermida, who each coaxed walks from Shirley, each scored on the two-bagger, the outfielder’s second of the night and 18th on the year. Hector Gomez added to the rally and made it a 5-1 contest when he plated Halton with an RBI single.

Nashville kept it going in the fifth against Shirley. Irving Falu reached on a bunt single and later scored on Jason Rogers’ sacrifice fly to run the score to 6-1.

RedHawks first baseman Matt Duffy led off the home half of the fifth with a solo homer to left-center off Fiers, the slugger’s ninth big fly of the year. Oklahoma City later loaded the bases against the Sounds’ right-hander and Fiers issued a two-out walk to Austin Wates to force home Miller to reduce the Nashville lead to 6-3. Preston Tucker followed with a first-pitch rocket off the right-hander that was right at Matt Clark, who snared the liner with a lunging grab for the final out of the frame.

Fiers (7-5) picked up his first victory since May 10th, a span of eight outings for Nashville, after holding the ‘Hawks to three runs on three hits over his five frames of action, walking four batters while striking out four during his 80-pitch effort.

Kevin Mattison opened the Sounds’ seventh with a bunt single and later scored from second on a one-out Eugenio Velez single to center, which chased Shirley from the contest.

Shirley (0-1) drew the loss after surrendering seven runs on 10 hits in 6 1/3 innings. The damage could have been worse, but the southpaw induced four double-play groundouts from the Sounds on the night.

Brewers reliever Jim Henderson made his first rehab appearance for Nashville in the contest and worked around a leadoff walk to toss a scoreless inning, throwing 16 pitches (10 strikes).

Alfredo Figaro closed out the victory with a pair of scoreless relief innings for Nashville.

The Sounds will look to secure only their third winning road series of the year when the teams wrap up the four-game set with a 6:05pm finale on Sunday evening. Right-hander Taylor Jungmann (4-5, 5.66) will toe the slab for the Sounds and face Oklahoma City southpaw Rudy Owens (5-4, 5.16).