Houston, TX – The green stuff that clouds up fish tanks – it’s not just an aesthetic annoyance. In fact, if you’ve been watching recent news of algal bloom concerns in Lake Erie, you know that the right conditions for algae can lead to contamination of local water sources, potentially impacting aquatic life and humans.

What you might not have known is that among the resources to help study this problem you will find the International Space Station’s Hyperspectral Imager for the Coastal Ocean (HICO).

This instrument, mounted to the exterior of the orbiting laboratory, provides a way for researchers to see 90 wavelengths of light not visible to the human eye.

This can help with research on harmful algal blooms (HABs) because they, along with other organic materials, have a “spectral signature.”

The biological matter emits a unique wavelength as it absorbs and scatters solar energy, resulting in fluorescence and backscattering. Essentially the light reflects back to HICO, which reads the data like a fingerprint. 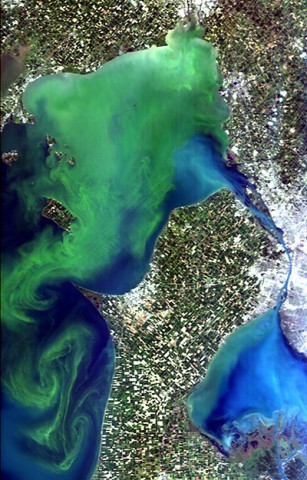 Researchers can use the information from HICO to “see” what they’re missing with their own senses. With it they study biological and chemical signatures for aquatic and terrestrial materials. This can reveal the presence of microscopic plants, organic compounds, suspended sediments and other factors controlling water quality.

HICO was first designed and built by the U.S. Naval Research Laboratory (NRL) for the Office of Naval Research to assess water quality in the coastal ocean. HICO continues to operate beyond its original one-year mission, having moved past the initial three-year mission when NASA took over the support of operations in January 2013. Researchers continue to use HICO for science around the world.

To address water quality issues, the Center for the Advancement of Science in Space (CASIS) partnered with the NRL at NASA’s Stennis Space Center (SSC) in Mississippi to enable the study of HABs, including those in Lake Erie.

“Historically, blooms have been visually observed by the naked eye due to the discoloration of the water,” said Ruhul Amin, Ph.D., principal investigator for the HICO CASIS-NRL project. “Now optical sensors can detect these changes in the color of the water and quantitatively measure the spectral radiance changes due to algae blooms.”

In the Lake Erie area researchers are looking at phytoplankton and algal blooms that occur regularly in summer months, often in the harmful quantities found this year. Of particular concern are blue-green algae Microcystis spp., which can cause health concerns in humans such as nausea, numbness or dizziness—potentially leading to liver damage.

Once airborne in sea spray, the brevetoxin producing HAB Karenia brevis—known as red tide—can go beyond irritating the eyes and lungs of coastal visitors, according to Amin, as it is capable of killing fish, birds and marine mammals. No human fatalities are directly attributed to brevetoxins, he goes on to say, though it is possible to reach fatal toxin levels during K. brevis blooms.

“Unlike conventional multi-spectral images, the high spatial and spectral resolution afforded by HICO enables us to develop new approaches to more fully utilize hyperspectral data to distinguish HAB species from space,” said Amin. “Conventional multi-spectral ocean color imagery in general does not contain sufficient information to discriminate between bloom species, but HICO’s contiguous bands collect information that can enable us to identify the species.” 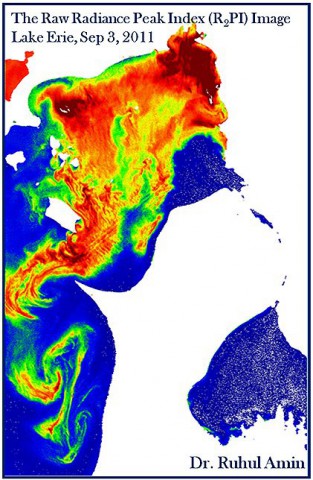 Researchers at the NRL-SSC have used HICO’s ability to show visible and near infrared wavelengths to follow the Lake Erie blooms for years. The most recent HICO data collections for the area took place in mid-August as the station passed over the Great Lakes region.

This information, in addition to ground data and other resources, can help with developing and validating bloom-detection algorithms. One such technique is the Raw Radiance Peak Index (R2PI), developed as part of Amin’s research to quantify the blooms in terms of chlorophyll concentration and even identify the algae species from space-borne measurements.

“The [HICO] imagery offers the potential to provide a cost-effective means to detect and monitor the bloom,” said Richard Gould, Ph.D., NRL’s head of bio-optical/physical processes and remote sensing. “In addition, the imagery could potentially facilitate in situ sampling programs. For example, based on the spatial extent of the bloom observed in the imagery, a more directed ship-sampling program could be undertaken.”

HICO is a pathfinder for possible future operational instruments, according to Curtiss Davis, Ph.D., HICO project scientist at Oregon State University where they manage the HICO website for requesting new data collections. To test that utility, the U.S. Environmental Protection Agency, working with NRL-SSC, conducted test studies to evaluate the use of HICO for monitoring coastal water health.

The imager continues to function normally and there are more than 50 projects that currently use HICO data. Since NASA took over supporting operations, the full five-year HICO data set is available online at the Ocean Color website, managed by NASA’s Goddard Space Flight Center in Greenbelt, Maryland.

“HICO was planned as a one year demonstration,” said Davis. “We have far exceeded all expectations and are approaching five years of successful operation [in September 2014] on the space station.”

One of HICO’s projects scheduled for this fall is led by Cara Wilson, principal investigator in partnership with the National Oceanic and Atmospheric Administration and researchers from the National University of the Patagonia San Juan Bosco, the Argentinian Institute of Oceanography and the Southern Right Whale Health Monitoring Program

The study will look at the Peninsula Valdes region of Argentina, a known breeding ground for southern right whales (Eubalaena australis). According to Wilson, since 2004 there has been an alarming rise in the mortality of calves—those less than three months old—at Peninsula Valdes.

Though the cause for the mortality increase is undetermined, Wilson points out that there has been a five-fold growth in the magnitude of spring phytoplankton blooms in the area during the same time period. Researchers hope that the HICO data spectral characterization will help identify the species in the bloom.

HICO also is one of the participating instruments available to join in response efforts, such as those performed from space station by the International Space Station Agricultural Camera (ISSAC), for the United Nations International Charter for Space and Major Disasters.

This charter puts out a call for imagery of areas impacted by natural disasters to collect data on a “best-effort” basis. The responding information is available online for organizations in impacted regions to share with ground responders to produce near real-time maps and other resource aids.

Beyond HICO, there are plans for a next-generation hyperspectral imager for the space station that will advance this type of imaging from orbit.

The proposed new instrument is a collaboration between CASIS and the United Nations Institute for Training and Research (UNITAR). CASIS will manage development and launch of the instrument, as well as the proposals for use and subsequent operations.

“In addition to the timely delivery of data and ready-to-use products during and following natural disasters, we are encouraged by the wide range of new applications that hyperspectral imaging will allow us to provide to U.N. member states and sister agencies,” said Einar Bjorgo, manager of UNITAR’s United Nations Operational Satellite Applications Program. “For example, these images would allow better natural resource management and disaster response, allowing national actors relevant and timely data at no or low cost,”

The space station’s hyperspectral imager in orbit offers a bouquet of assistance to users, including and beyond monitoring algal blooms. Whether researchers use the data to help with humanitarian efforts, disaster relief and risk reduction, coastal management or something else, these space station instruments provide the Earth a global resource.