Clarksville, TN – It was a good day for Clarksville Academy’s golf program, September 9th at Swan Lake Golf Course, with the girls team repeating as District 10-A tournament champions; while the boys team finishing runner-up to Lipscomb Academy.

With the championship and runner-up finish, the two squads will advance to the September 15th Region 5-A tournament at the Champions Run Golf Course, in Rockvale, TN. 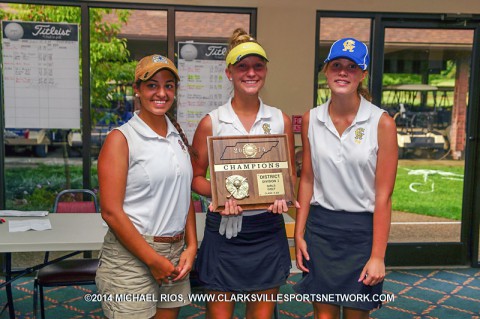 “It’s incredible for the girls repeating as district champions, even after losing AnnaMichelle (Moore),” Clarksville Academy coach Jake Peterson said. “Bailey (Foote) really stepped up today and Mallory (Saleh) came in as a freshman and posted a solid round of 88 and Michaela Dowdy was our third (player).

“They’ve been a strong team all year and with Swan Lake being our home course it was kind of an advantage for us, but at the same time you have to come out with all of the other competitors and have great rounds.”

Foote would finish as the runner-up medalist, after tying for low score with Lipscomb Academy’s Christina Vetvong, with a round of 81 – but losing the playoff on the third extra hole of play.

Saleh was the fourth-place medalist.

Along with Clarksville Academy, Lipscomb Academy and East Robertson High School’s teams will advance to the region tournament as runner-up and third-place finishers. 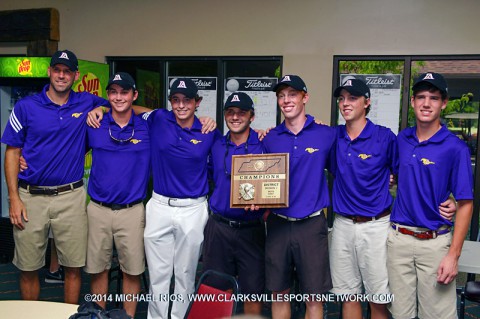 On the boy’s side, the Cougars return to the region tournament after falling just a little short last year – with then freshman and current Clarksville Academy sophomore Austin Cherry being the lone player to advance last season.

“This is my first time to go to the region as a (boys) qualifying team,” Peterson said. “It’s exciting for them, with our low score coming from a freshman in Wyatt Samuels with an 81, but we had three scores in the low 80’s and getting those three scores was a solid performance from out guys.”

Along with advancing to next week’s region tournament, the Cougars also had the highlight moment of the day by any individual player, with freshman Dawson Bagwell carding a hole-in-one on the 166-yard, par three, 13th hole.

“That has huge for a freshman to come into the district tournament and getting a hole-in-one,” Peterson said. “If you think about it, we finish in second place by one stroke and if he just barely misses that shot on the hole-in-one and makes a birdie instead we tie Martin Luther King High School for second.

“That shot was the deciding factor with us getting second place and getting the second-place runner-up trophy.”

Winning the tournament on the boys side was Lipscomb Academy, while Martin Luther King took third place.

Also advancing to the region tournament on the boys side to play as individuals are East Robertson’s Levi Lorenzo and Cody Waggoner, McEwen High School’s Kyle Hodge, Nashville Christian’s Austin Bishop and Jo Byrns’ Nicholas Henderson – who was low medalist on the boys side with a round of one-over 72.