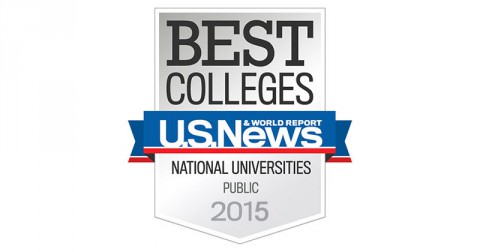 In 2012, the University was ranked 87th among both public and private schools in the southeast.

U.S. News & World Report, which surveyed nearly 1,800 schools nationwide, has released its Best Colleges rankings since 1983, and the list is often used by prospective students when determining where to attend.

APSU’s 2015 Best Colleges ranking is simply the most recent in a list of accolades the University has received this summer. In late August, the national television program the PBS NewsHour profiled APSU’s use of innovation to boost graduation rates.

Early that month, the federal government applauded APSU’s efforts in supporting veterans and military personnel by singling out the University as the only school in Tennessee to commit to the new “8 Keys to Veterans Success” federal initiative.

In July, the Chronicle of Higher Education named APSU as one of the best colleges in the nation to work for. APSU was the only public university in Tennessee to make the Chronicle’s annual “Great Colleges to Work For” list. The University won honors in nine of 12 categories, placing it on the Chronicle’s “Honor Roll” list.

For more information on the U.S. News and World Report rankings, visit www.usnews.com/colleges