Clarksville, TN – Rossview High School’s running attack went through, around and over the Stratford High School defense, Friday, September 12th, with the Hawks totaling 505 yards on the ground in a 55-12 blowout victory over the Spartans.

Isaiah Johnson would lead the way for Rossview (2-2), with the senior running back finished the night with 251 yards on 18 carries – including touchdown runs of 43- and 4-yards.

In fact, his 43-yard run for a score — for a 6-0 lead — was the first touchdown of the night for the Hawks, which came on their second drive of the game after the defense had forced a punt by the Spartans from their eight-yard line. 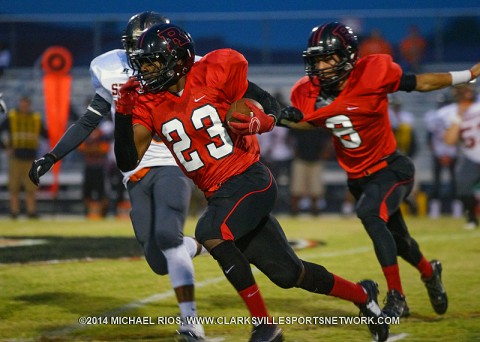 That score opened the floodgates for Rossview, as they found the end zone on each of their next five possessions in the opening half – while also returning an interception for a touchdown.

The next Rossview score came on an eight-play drive – the most plays needed by the Hawks on any of their scoring drive – with Johnson taking it in from four yards out to give the Hawks a 12-0 advantage after one quarter of play.

Rossview would put the game away in the second quarter – scoring five times – with the first coming just 29 seconds into the period, with quarterback Tequan Evans weaving his way through the Stratford (1-3) defenders for a 61-yard touchdown run – with Johnson converting a two-point conversion for a 20-0 lead.

Evans would finish the game with 129 yards rushing on just eight carries.

Tristin Luke would join the scoring barrage on the Hawks next drive, as he went in from 14 yards out, followed by the second two-point conversion run by Rossview – this time with Evans going in to make it 28-0, with 7:38 left in the first half.

The Rossview defense would account for the next Hawks touchdown, with cornerback Jordan Gold cutting in front of a Spartans receiver to intercept a pass in stride and take it back 29 yards for a score, with 6:04 left in the first half.

Stratford would finally end the Rossview scoring run with a 81-yard touchdown pass to Trevaughn Hatcher from Josh Trueheart – has Hatcher got behind the Hawks defense on one of the few mistakes made by Rossview in the first half.

The Hawks would close out the first half by scoring twice more in the final three minutes, to take a 48-6 lead into intermission – with Evans scoring his second touchdown of the game, this time from 21 yards out, while Luke added his second TD of the game with just 20.1 seconds left on a 22-yard run.

The second half was played with a running clock, under the TSSAA mercy rule – with Rossview scoring its lone touchdown in the third quarter on a 3-yard run by Bobby Lenor, while Stratford added its final score of the night as the final horn sounded on a 14-yard pass from Robert Lilley-Sneed to Stephon Rose for the 55-12 final.

Rossview will return to District 10-AAA play on September 19th, as they travel to Henry County High School for a 7:30pm showdown between the top two teams in the district standing last season.