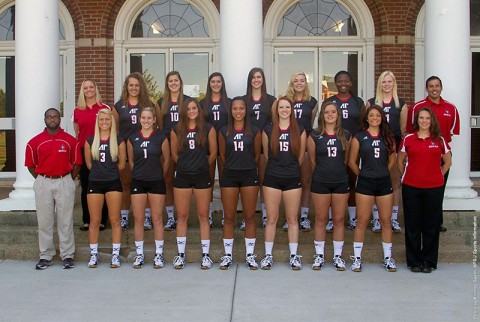 Austin Peay (3-8) has spent the season’s first three weeks on the road, playing in tournaments at Clemson, Akron and Western Kentucky as well as a lone road game at Evansville.

The Lady Govs have won three games in those 11 matches, but their progress on the court belies their record.

“I believe we have made progress on our side of the court,” said Lady Govs head coach Taylor Mott. “We started the season with our offense just not clicking and a lot of that was our own fault. Last weekend (at Western Kentucky) was a glimpse what we could be capable of against top-notch competition. I am hopeful we will take what we learned and apply it going forward.”

Senior outside hitter Jada Stotts leads the Lady Govs, and ranks fourth among OVC hitters, with 3.45 kills per set, recording 131 kills in 38 sets.

However, freshman outside hitter Christina White has been a pleasant surprise, ranking second on the team with 79 kills (2.32 kills per set).

Other early standouts include junior libero April Adams, who was named to the all-tournament team at Western Kentucky, and junior setter Aubrey Marsellis, who was an all-tournament pick at Akron.

Adams recorded a team-best 45 digs at Western Kentucky and notched three service aces. Marsellis leads APSU and ranks eighth among OVC players in service aces, averaging 0.34 per set (13 total). She also has a team best 6.03 assists per set and is second on the team in blocks (0.39 per set).

Chattanooga (4-7) returns to the road after posting  2-1 record in its own tournament last weekend. The Mocs defeated Wright State and Mississippi Valley State, but dropped a five-set match to Ohio Valley Conference member Murray State.

Chattanooga is 0-2 against OVC teams this season, earlier dropping a three-set match to Belmont. Individually, Kristy Wieser leads the Mocs with 114 kills (2.59 per set).