Funding includes loan guarantees and grants for solar energy to create jobs, promote energy independence and advance the use of renewable fuels

“These loan guarantees and grants will have far-reaching impacts nationwide, particularly in the rural communities where these projects are located,” Vilsack said. “Investing in renewable energy and energy efficiency will continue the unprecedented increase in home-grown energy sources and American energy independence we’ve seen in recent years. This is creating jobs, providing new economic opportunities and leading the way to a more secure energy future.” 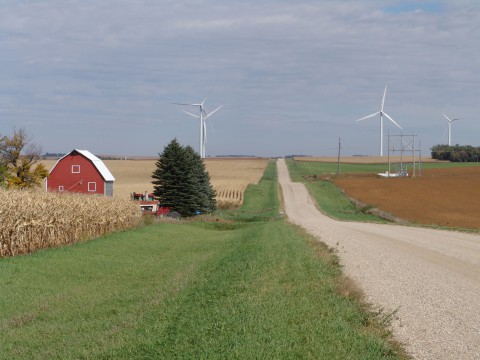 Use of wind turbines for renewable energy production on farms is on the rise. (USDA Rural Development)

Secretary Vilsack made the announcement while in North Carolina to highlight USDA’s investments in rural renewable energy projects, as part of the Obama Administration’s ‘all-of-the-above’ energy strategy. It is the most recent of a series of USDA actions to strengthen the country’s energy sector. Two weeks ago, Vilsack announced a $105 million loan guarantee to a company that will produce jet fuel from municipal solid waste.

Today’s funding is being provided through USDA Rural Development’s Rural Energy for America Program (REAP) [1]. REAP was created by the 2008 Farm Bill and was reauthorized by the recently passed 2014 Farm Bill.

The announcement comes on a day when President Obama is announcing new executive actions to further advance the development of solar technologies across the country. These new investments in solar will reduce America’s energy consumption, cut carbon pollution by nearly 300 million metric tons – equivalent to taking more than 60 million cars off the road for a year – and save businesses nearly $45 billion on their energy bills. The renewed effort to invest in solar energy also includes commitments from a broad coalition of 50 public and private sector partners, including leading industry, community development organizations and housing providers in 28 states. To learn more about this new Obama Administration initiative to increase the use of solar power, visit the White House website [2].

“USDA is proud to play a key role in Obama Administration’s efforts to promote the use of solar technologies,” Vilsack said. “Of the REAP projects funded today, 240 projects are for solar investments of $5.2 million in grants and $55.3 million in loans.” 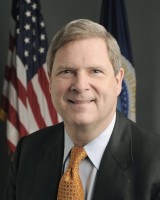 During Secretary Vilsack’s trip to North Carolina, he visited Progress Solar in Bunn, N.C., which received a $3.4 million REAP loan guarantee in 2012 for installation of a solar array. Progress Solar now produces enough solar energy to power 540 average-sized homes each year. The 4.5 megawatt array was developed by North Carolina-based O2 Energies, Inc. The Progress Solar site is a dual-use solar power plant and a working farm where a 10th generation farming family raises free range sheep and lambs. The project serves as a test site for herd management best practices on a solar farm, and the goal is to model future collaborative efforts that marry solar-energy production with agriculture production. This is the seventh solar farm venture that O2 Energies has developed in North Carolina.

In total, Vilsack announced $68 million in REAP loan guarantees and grants today [3]. Funding is contingent upon the recipients meeting the terms of the loan or grant agreement.

Since the start of the Obama Administration, REAP has supported more than 8,800 renewable energy and energy efficiency projects nationwide. During this period, USDA has provided more than $276 million in grants and $268 million in loan guarantees to agricultural producers and rural small business owners.