HomeNewsClarksville Weekly Market Snapshot from Frazier Allen for the week of September...
News

Clarksville Weekly Market Snapshot from Frazier Allen for the week of September 21st, 2014

Clarksville, TN – Fed policymakers reduced the monthly pace of asset purchases (QE3) by another $10 billion, to $15 billion, on track to finish buying at the end of October. The Fed repeated that “it likely will be appropriate to maintain the current target range for the federal funds rate for a considerable time after the asset purchase program ends.”

Fed officials’ projections of the appropriate year-end federal funds target rate indicated that most expect to begin raising short-term interest rates sometime in 2015, but there was a wide range in the individual forecasts (and implicitly, in their expectations of when rates will start to rise – with most spread roughly evenly between March and September).

Expectations of the appropriate federal funds rate for late 2016 were even more dispersed. This wide range of forecasts reflects different expectations for growth and inflation, but mostly a wide dispersion in estimate of the amount of slack in the economy, and the labor market in particular.

The economic data were generally on the weak side of expectations. Industrial production fell in August, but reflected a seasonal adjustment quirk in autos (positive, but mixed, and generally lackluster otherwise). Residential construction figures disappointed, but the data for the multi-family sector are erratic.

The Consumer Price Index fell 0.2% (+1.7% y/y), unchanged excluding food & energy (+1.7% y/y and a 1.8% annual rate for the first eight months of 2014). The Producer Price Report showed a general absence of inflation pressures within the pipeline.

As expected, Scotland voted to remain part of the United Kingdom. The margin of victory was higher than polls had suggested.

Next week, the economic data could generate some reactions in the financial markets (if sufficiently far from expectations), but the reports aren’t going to alter the bigger economic picture. Existing home sales are likely to have risen slightly in August. The reports on new home sales and durable goods orders are choppy and unreliable.

Orders are expected to have fallen sharply in August, reflecting a pullback from the July spike in aircraft. The estimate of 2Q14 GDP growth is expected to be revised higher, but combined with the weak 1Q14, still will average out to a lackluster result for the first half of the year. Data for the following week, including the September Employment Report, will be much more important. 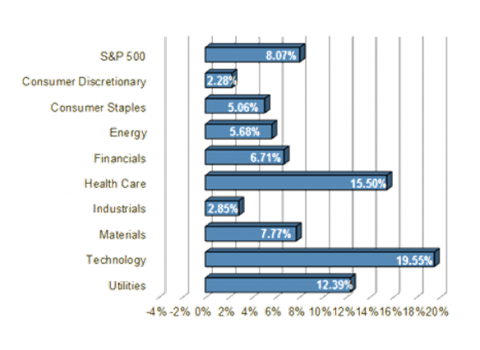 The information contained herein has been obtained from sources considered reliable, but we do not guarantee that the foregoing material is accurate or complete. Data source: Bloomberg, as of close of business September 18th, 2014.