Glencoe, AL – Austin Peay State University women’s golf team fashioned its best round of Chris Banister Golf Classic, Wednesday, but could not move up on the final day.

The Lady Govs shot a final-round 315 to end at 988, leaving them in the same place (11th) in which they began the day on the Mindbreaker/Heartbreaker at the Silver Lakes Golf Course. 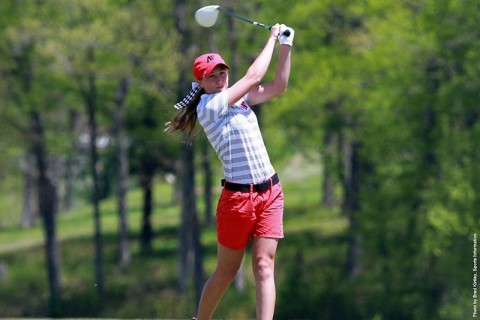 Troy State was the runaway winner with a 900, 16 shots better than Morehead State.

“I was glad to see the team’s response after our team meeting last night,” APSU coach Sara Robson [1] said. “Although things didn’t go like they wanted them to do, they fought through it and played with a lot of guts.

“Our short game is our calling card—is what we do best—and this entire tournament is was something we really struggled with it.”

After recording no scores in the 70s, Monday, the Lady Govs had three, Tuesday. In fact, senior Meghan Mueller [2], junior Jessica Cathey [3] and sophomore Morgan Kauffman [4] all shot 77s Tuesday. Sophomore Morgan Gardner [5] rounded out the team score with an 84, one shot better than freshman AnnaMichelle Moore [6].  Playing as an individual, Amber Bosworth [7] shot an 84.

“Meghan really played well today,” Robson said. “She had it going—she had five birdies but a couple of holes hurt her.

“Jessica was even at the turn but she four holes that really hurt her, the same with Kauffman.”