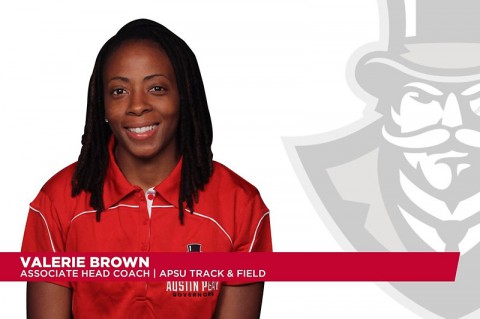 Since joining the program in 2011, Brown has elevated the sprints, hurdles and relays program to near the top of the Ohio Valley Conference, culminating in her ascension within the coaching ranks.

With her new duties, Brown will oversee the other assistants, recruiting, act as liaison for academics and communication, as well as her coaching duties.

“A lot of our recent success is a direct result of having Coach Brown as part of our program,” Molnar said. “The continuity she has implemented has made a huge difference. She’s done a great job in recruiting – she’s got the ability to bring in good kids and make them better and we’re happy to have her on board.”

In the last three years, Brown has overseen a resurgent Austin Peay track program that must be acknowledged as one of the strongest in school history. Since taking over, Brown has coached one OVC Champion, two NCAA Regional participants, one U.S. Junior Pan American Games qualifier and seen her athletes total 14 medals (one gold, eight silver, five bronze) in OVC Championship action.

A 2009 graduate from Western Kentucky, Brown’s own athletic exploits provide her a solid foundation. She was an indoor All-American in the 400m for the Hilltoppers – only the second in program history – and was part of Sun Belt Champion relay squads in the 1600- and 400-meter disciplines.