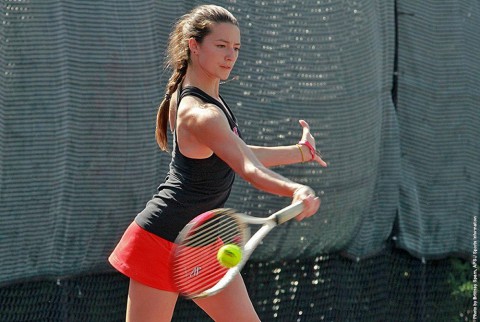 The Lady Govs faced off with the Lions earlier this fall when both teams took part in the Skyhawk Tennis Fall Invitational hosted by UT Martin. In that tournament senior Vanessa Tavares [1], sophomore Hannah Tatlock [2] and freshman Brittney Covington [3] all went undefeated against the Lions.

The Lions finished with an 11-11 record last season and will be led by senior Natalia Barragan and sophomores Olivera Ngouabeu and Avery King. Ngouabeu earned a 9-9 record at No. 1 singles, while Barragan, who mostly played at the No. 2 position, finished the spring 10-8 and King finished 9-8 at No. 3. The pairing of Ngouabeu and Barragan finished the season with a 6-5 record at No. 1 doubles, while Barragan also earned a 5-3 record at the same position while playing with King.

“While we’ve been battling injuries lately, I’ve been very impressed with the play of Hannah,” said head coach Ross Brown [5]. “Ornella had a great week last week, too, and this weekend will serve as a great opportunity to get some work in before having a little break before regionals.”

Having played each of the last three weekends, the Lady Govs will have a well-deserved break before traveling to ITA Ohio Valley Regionals.  The five-day event will begin Friday, October 17th, at Tennessee.