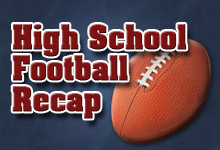 Clarksville, TN – Week 6 was the last chance a lot of fans got to see their teams play at home. It was also the last chance District 10-AAA teams will play non-league opponents. Only four games remain in the regular season and with the standings so close, every game will be crucial to post season play.

As the weather changes, this is the time of year when all the pre-season practice separates winners and losers. Execution, penalties and injuries will determine the post season top seeds.

Two teams are 3-0 in District 10-AAA play: The Springfield Yellow Jackets and the Henry County Patriots. The Yellow Jackets won their sixth game in a row against White House, 39-8, and are currently undefeated. The Patriots racked up 70 points against the Kenwood Knights for their second straight District win.

These two teams will play each other in Springfield Friday for District 10-AAA supremacy.

The Northwest Vikings, Rossview Hawks and Clarksville High Wildcats all earned wins this week. The Hawks were bouncing back from a loss to Henry County in week 5. The Vikings broke a 3-game losing streak and earned three wins for the first time in five years.

The Wildcats beat up the Coyotes 44-7, extending their win streak to two games. All three teams are tied at 3-3. However, the Vikings have yet to defeat a District 10-AAA opponent.

The Knights loss to the Patriots leaves them at 3-3 as well. The Hawks, Wildcats and Knights are all also 2-1 in league play.

The Clarksville Academy Cougars have not lost a game since week 2. Their 42-27 win over Harpeth places them second in District 10A behind undefeated Nashville Christian.

The Northeast Eagles are still win less. They joined the Coyotes, Montgomery Central Indians and Fort Campbell Falcons in the losers column for week 6.

In addition to the Patriots and Yellow Jackets match up at the top of the league this week, the Hawks, Knights, Wildcats and Vikings will all play each other with identical records. When the dust settles after week 7 their could be some shake ups at the top of the District 10-AAA .