Clarksville, TN – Soggy conditions did nothing to slow down a Clarksville Lady Wildcats offense that had already scored 18 goals before going into the 2014 District 10-AAA Soccer Tournament championship game against the third seeded Rossview Lady Hawks Friday night at Hilda J. Richardson Field.

The Lady Wildcats put together their third shutout in a row to defeat the Lady Hawks 6-0 and become the 2014 District 10-AAA Soccer Tournament Champions. 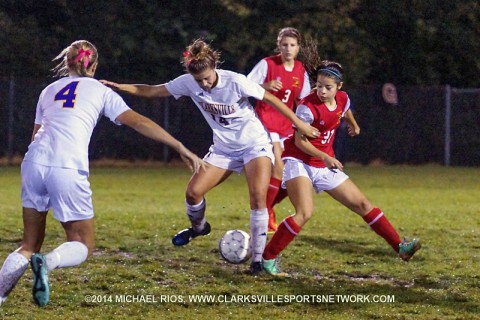 The Lady Wildcats continued an impressive performance they began in the tournament opener with a 10-0 win over the Springfield Yellow Jackets.

While puddles, mud and overall soggy field made it harder to move the ball, it did not stop the Lady Wildcats from connecting sharp passes for attacks and controlling the pace of the game by dominating time of possession.

Lady Hawks goalkeeper, Arianna Millian, had her hands full until she left the game late in the second half. The Lady Wildcats made 18 total shot attempts, 10 on goal. Millian made four saves.

Conversely, the Lady Hawks were held to no shot attempts for the entire game. Although they improved in the second half, they had trouble maintaining ball control and connecting on enough passes to produce any successful attacks.

In the 13th minute, Jordan took a shot out of a crowd in front of the net which was redirected pass the goalkeeper by Kelsey Greiff for the Lady Wildcats first score of the game.

The second score was a header made by Baggett with the assist from Lexie Hayes in the 34th minute. Three minutes later Jordan took on Millian one-on-one and beat her for the Lady Wildcats final score before halftime.

Baggett’s second goal was the result of a breakaway in the 56th minute. Next, Baggett made the assist to Jordan whose second goal made the score 5-0 in the 70th minute. Hayes scored the last Lady Wildcats goal in the 75th.