Nashville, TN – Austin Peay State University freshman running back Otis Gerron was named the Offensive Player of the Week by the Tennessee Sportswriters Association for his efforts against Mercer last Saturday. 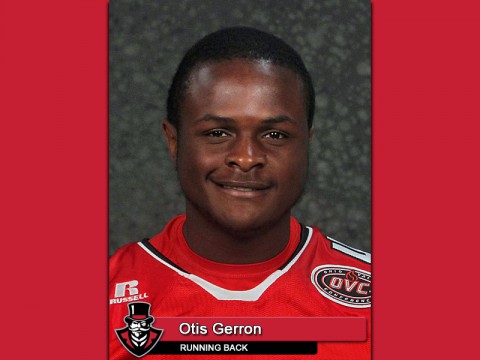 Gerron, a freshman walk-on running back, carried 15 times for 196 yards against Mercer, including an 89-yard touchdown run.

The Burns, Tennessee, native saw his most extensive action of the season in the contest. The former Dickson County High School star also rushed 12 times for 38 yards and caught two passes for 24 yards versus Illinois State.

Gerron’s 196 yards were the most by a Governor since Ryan White recorded 228 yards against Southeast Missouri on October 10th, 2009, and his 89-yard TD run was the longest by an APSU runner since Terrence Holt’s 80-yard run versus Eastern Kentucky on September 24th, 2009. He leads the Govs with 272 yards rushing on 38 attempts this season, averaging 7.2 yards per carry.