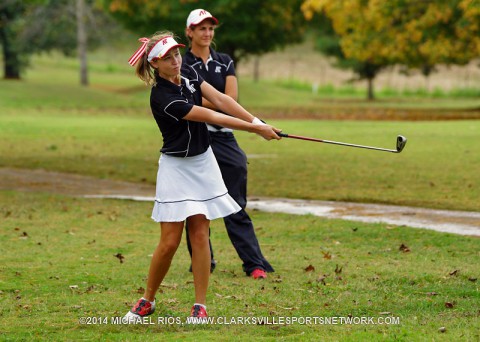 This week’s field consists of 15 teams including a trio of Ohio Valley Conference programs: Belmont, Jacksonville State and Tennessee Tech.

In addition to host Middle Tennessee, regional foes such as Arkansas State and Western Kentucky will be participants.

“There are only certain things we can control while we are playing,” APSU coach Sara Robson said. “We are looking forward to playing at MTSU this week. Our focus needs to be on hitting greens and trusting ourselves. We will need to be intentional about our routines so that we can focus on each and every shot. If we will focus on the details, we will see the positive results as we play.

“There are only certain things we can control while we are playing. We need to recognize the things that are out of our control and let them go quickly.”

Coming off a fourth-place finish this week at their own F&M APSU Intercollegiate, the Lady Govs will take a lineup of one junior (Jessica Cathey [1]) and four sophomores (Amber Bosworth [2], Morgan Kauffman [3], and Morgan Gardner [4]) to Murfreesboro, TN. This quintet was APSU’s top finishers at the F&M.

Bosworth was the top tourney performer finishing tied for ninth with a 10-over, 153 two-round total, including an opening-round 73. Kauffman and Cathey are coming off of solid performances from last week as well, with Cathey tying for 13th and Kauffman tying for 16th.

Schutt led the Lady Govs four individuals, tying for 16th with a 13-over 156. Gardner also performed well, having a team-best final-round 74 and finishing the tournament with a 157, good for 21st.