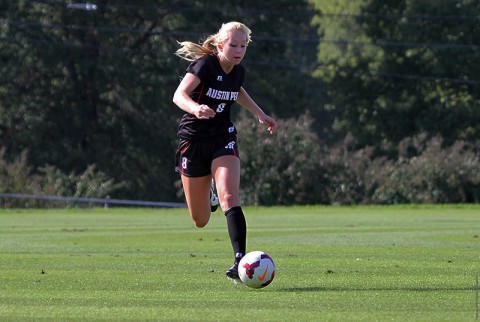 On the outside looking in with three matches to go in the regular season, Austin Peay finds itself in dire need of points this weekend.

The offense, currently averaging less than a goal per game on the season, features only two multi-goal scorers – sophomores Gina Fabbro [1], who leads the team with five goals, and Merritt Monger [2], who scored both her goals in the home opener against Chattanooga, August 24th.

Picked to finish ninth in the OVC preseason poll, Murray State (9-7-0, 5-2-0 OVC) is battling for a bye in the OVC Tournament, with the same record as Jacksonville State and Southeast Missouri.

The Racers are paced offensively by senior Julie Mooney’s 12-goal, three-assist campaign that has her tied for second in the OVC with 27 points.

The defending regular-season champions, UT Martin (10-5-1, 4-2-1 OVC) remains one of the most dangerous attacking units in the OVC.

Rianna Jarrett is tied with Mooney for second in the conference at 27 points and senior keeper Mariah Klenke handles things with aplomb on the other end, leading the OVC with a .865 save percentage.

Austin Peay took down UT Martin for the first time since 2006 with a 2-1 win thanks to goals from Tatiana Ariza [3] and Frankie Carbajal [4] – the former would earn Tennessee Sports Writers Association Player of the Week honors, while the latter would be named to CollegeSoccer360.com’s National Team of the Week.

If the win against UT Martin in 2013 was the highest of highs, the Lady Govs loss at Murray State was the lowest of lows. On the regular season’s final day, they gave up two goals to the Racers and never recovered, falling 2-1 and dropping to the No. 6 seed in the tournament despite a sterling 10-save effort from junior Nikki Filippone [6].

Be sure to follow all the Lady Govs action at LetsGoPeay.com, and check them out on Twitter (@AustinPeaySocr) and by liking the Austin Peay’s Official Athletics Facebook page.

Live stats will be available during the match at www.LetsGoPeay.com [9] , while a live stream of the match will be available on the OVC Digital Network. Postgame video from most home and select road events can be found at www.youtube.com/CultureofExcellence [10]