Clarksville, TN – West Creek’s junior quarterback Jordan Justice threw four touchdowns and rushed for one more in the Coyotes’ 35-0 shutout of the Northwest Vikings Friday night. The win ended a four-game losing streak and was the Coyotes first victory over a District 10-AAA opponent this season.

In an impressive aerial assault, Justice completed 9-of-12 passes to five different receivers for 313 yards with four touchdowns. Two of the touchdown passes were over 45 yards. 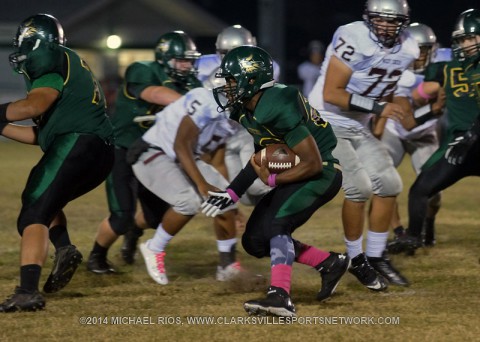 While Justice was tossing bombs, the Coyote’s defense stifled the Vikings offense, earning their first shutout of the season. The normally potent Vikings rushing attack was held to 125 yards.

Hunter Woodruff got the start at quarterback for the Vikings. With a limited running game and playing from behind, he was forced to attempt several throws, but had very little success. Woodruff completed only 4-of- 15 pass attempts for 48 yards and threw two interceptions.

The Coyotes’ offense was howling from the kickoff. It took them seven plays to go 59 yards and score on their opening drive. Justice completed a 55-yard pass to Carter on a second down and 20 to set up first and goal on the Vikings 5-yard line. Three plays later, Justice dashed two yards for the Coyotes first touchdown.

After the Coyotes defense pushed a Vikings first and goal at the 7-yard line back to a 30-yard, failed field goal attempt, the Coyotes put together an eight-play scoring drive that ended with a 10-yard touchdown pass to Tyree Townsend. In addition to his touchdown reception, Townsend rushed for 37 yards in the game.

The Coyotes’ third score of the quarter came seconds before halftime. After the Vikings punt and a penalty, the Coyotes had first and ten on the 48-yard line with 15 seconds on the clock. It was enough time for Justice to launch a long, high spiral down the sideline to Young who took it to the house to make the score 28-0.

The Coyotes last score was an 11-yard touchdown pass to Darrell White with 5:55 remaining in the third quarter. Two interceptions and the combined running of Jimmy Miller and Jessie Strother closed the game.