Clarksville, TN – Northwest High School’s boys basketball team got out to a 13-2 lead over Montgomery Central High School,Thursday  November 6th at the Dunn Center in the Montgomery County High School Basketball Jamboree, on their way to a 28-22 victory versus the Indians.

JaRyan Young and Mayrel Randolph would spark the quick start for the Vikings, with Randolph scoring four of the first six points by Northwest – in the first 1:29 of the matchup – while Young scored six points, including the final four points to give them the 13-2 advantage. 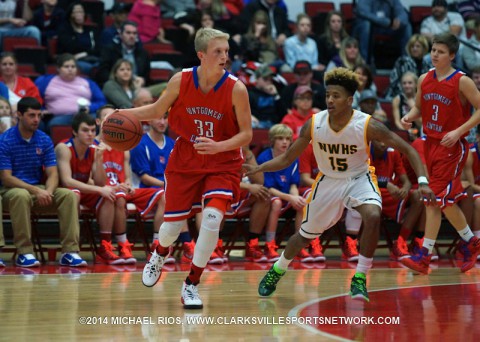 Montgomery Central would finally get going in the final 2:40 of the first quarter, outscoring the Vikings 8-2 over that span to close the gap to 15-10, after the first eight minutes of play.

Lamont Smith would be the key in the Indians rally, as he scored five of the eight points, while Damarcus Brewer added a three.

The Indians would open the second quarter with a bucket from Smith, to get to within three points at 15-12, but Northwest would answer back with a three from Dezman Stacker and a basket from Marice Wright to push the Vikings lead back out to eight points, 20-12, with 6:10 left in the scrimmage.

Montgomery Central would try to rally over the next 3:30 by outscoring the Vikings 7-2 – including a three from Zach Norfleet to make it 22-19, with 2:30 left.

But Northwest would answer back with a three-point field goal from Young and a three-point play by Elijah McCoin to give Northwest its biggest lead since its opening run of the game at nine points, 28-19, with under two minutes left in the half.

Montgomery Central would close the matchup by scoring the final three points, coming on one-of-two free throws by Matthew Trotter and a bucket by Jacob Hite.