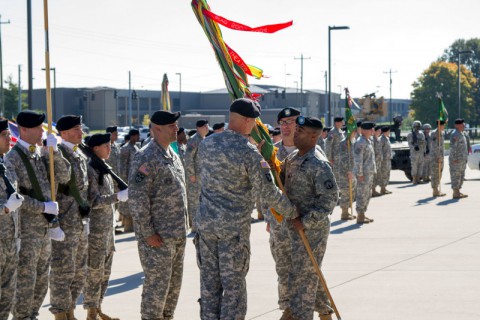 One of the most important duties of a command sergeant major is to serve as the keeper of the unit’s colors, which is the flag that represents the organization along with serving as a symbol for the commander’s authority. At the apex of the ceremony, Tookmanian, a native of Hillsdale, New Jersey, standing before the assembled battalion, received the colors from the honor guard.

He then held and inspected the colors for the last time before passing them to Lt. Col. Leevaine Williams Jr., the commander of the 716th MP Battalion. Williams then passed the colors to Vicars, demonstrating to the troops and assembled guests that the duties of the position had now passed to Vicars.

Williams started off his praise for his former senior enlisted adviser by reciting the poem “Invictus.”

“I am the master of my fate,” Williams, a native of Louisiana, said as he finished the last line of the poem. “I am the captain of my soul.”

He said that poem aptly described Tookmanian, who constantly displayed leadership by leading by example and leading from the front during his time in the battalion. Williams then thanked Tookmanian for his contributions to the battalion’s success and maintaining its legacy.

Tookmanian said it was an honor to be part of the battalion and all of his success came from the efforts of the Soldiers in the battalion.

“This is the most decorated MP battalion in history, and so I go in every day recognizing the awesome lineage and heritage that revolves around this battalion, and serving here at Fort Campbell means a great deal to me personally as well,” said Tookmanian. “My father was an MP here in the ’60s and I feel both a professional and personal bond.”

In the time since he assumed responsibility as the command sergeant major for the battalion on May 16th, 2013, Tookmanian assisted the battalion commander in leading the Soldiers of the 716th through several changes.

“When I first took the seat, the division had its own organic MPs and, since I’ve been in the seat, we’ve transitioned to a point where the division no longer has its own organic MPs and we are the sole source of providing MP support to the division,” said Tookmanian. “The MPs do a tremendous amount to enable the division in its role across the globe. Of course, we take care of the families and the installation while in CONUS [continental U.S.] in our protection role at the access control points and the policing mission; in fact crime has seen a nose dive here on Fort Campbell in the last year and a half.”

Tookmanian also said the battalion has deployed several of platoons and military working dog teams during his time at the unit. The platoons have carried out a number of different missions, including customs missions to inspect troops and cargo returning from Afghanistan to prevent contraband from entering the U.S., detainee operations, firefighting operations and military working dog patrols to find explosives and weapon caches.

As the battalion continues to prepare for missions, including supplying military police for Operation United Assistance, the U.S. mission to West Africa which is providing humanitarian assistance in the region hard hit by the Ebola pandemic, Tookmanian said it was difficult to leave the unit and its Soldiers, even though they now had Vicars’ capable leadership to guide them.

“I think one of the most difficult things is transitioning out of the seat as the battalion is ramping up to deploy … it goes against my nature to transition as the formation is getting ready to go,” said Tookmanian. “So although it’s personally difficult, I have so much confidence in these guys I know they don’t necessarily need me and that’s the beauty of our Army.”4